Review: One Night Stands and Lost Weekends, by Lawrence Block

One Night Stands and Lost Weekends, by Lawrence Block 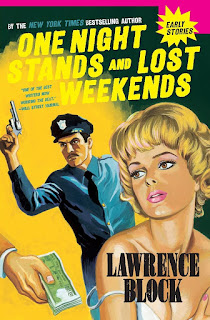 Everybody has to start somewhere. Lawrence Block, like many writers who came up in the 1950s, got his start in the men's fiction magazines of just after the pulp era. Digest-sized magazines, for the most part, that published very pulpy fiction. And this book collects the stories Block wrote and sold at the beginning of his career, to magazines like Manhunt, Trapped, Off-Beat, and so on. (One of them even went to Science Fiction Stories.) These pieces were first published between 1958 and 1963, with one outlier in 1966.

I have read a lot of lower end '50s magazines, but in my case almost all science fiction. But the crime fiction market was similar in its way. Block is quite dismissive of these early stories, and for the most part he is right, at least in that Block's later work, such as the Bernie Rhodenbarr and Matthew Scudder series, is much better. But it is still interesting to see a writer learning. And, really, it's clear from his earliest stories that he could WRITE -- could put words together in interesting ways, could make the reader want to see what happened (even if, in many of these early stories, what was going to happen was fairly predictable), and could make the characters breath, even if, again, these early characters were drawn from stock. I was reminded to an extent of the career of Robert Silverberg, in science fiction -- he began writing fairly routine SF that for all that was never less than compentently executed -- you could see from the start that he could write. And both Block and Silverberg also honed their novel-length skills by writing a good deal of paperback soft porn in the same period, by all accounts likewise competent and professional if formulaic. 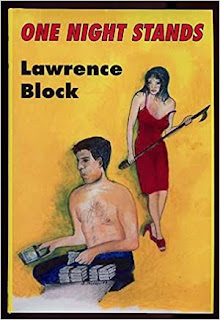 This book, a trade paperback from 2008, was actually originally published in two separate volumes by the estimable small press Crippen and Landru. The first book, One Night Stands, collected most of the short stories Block published in the first years of his career. These pieces run from say 1500 to about 4000 words. They are snappy, usually dark, setting up a criminal situation, and typically turning a little twist on things, often to the ironic misfortune of the main character. I had seen only one of these early, not surprisingly (me being me) the one science fiction story, "Nor Iron Bars a Cage", which I had read in its reprint in Judith Merril's Year's Best SF collection, under the original (lesser) title "Make a Prison". I thought the piece amusing anough, but frankly not worthy of inclusion in a year's best book -- and Block seems to agree. (It's about an alien sent to prison for a crime, and the people who imprison him congratulating themselves on the great prison they've constructed -- until they learn something (not all that surprising) about the alien's physical form that renders their prison useless.) But I read through the rest of these stories quickly, always entertained. As implied above, they tend to follow formula -- introduce a criminal situation -- typically someone doing a crime, or someone about to be victimized, occasionally telling of a cop investigating a crime -- and reveal an ironic twist, often the criminal getting caught for some foolish reason. There are a lot of beautiful women, either eager to sleep with the men in the stories, or not so eager but about to be forced to, or willing to sleep with them but for a much higher price than they think they're paying. Are these great works? No. But they're worth the price of admission. 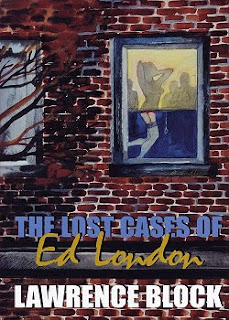 The second Crippen and Landru book was called The Lost Cases of Ed Lincoln, and it collected three novelettes about a private eye named Ed Lincoln. The genesis of these stories is amusing -- Block was hired to do a tie-in novel for a TV series starring Ray Milland about a PI named Roy Markham. His first try seemed too good to waste on a TV tie-in, so he changed the name of the protagonist to Ed Lincoln, and sold it as a standalone (Death Pulls a Doublecross.) (The Roy Markham novel he did write eventually appeared as well, though after the TV series had been cancelled.) Block decided to try to turn Ed Lincoln into a series character, but never could make another novel work. But he did write these three novelettes for Man's Magazine in 1962/1963.

These are actually decent work, and a series of novels might have been OK. They're not great work, though. Ed is a fairly typical private eye, complete with a convenient friend in the police department, and a signature slightly unusual preferred drink (cognac.) He's happy to sleep with his clients -- though an ongoing minitheme is that the nicer (if not necessarily quite as beautiful) women he encounters are better for him. In "The Naked and the Deadly" he is hired by a beautiful young woman who says she's being blackmailed -- but when the "blackmailer" is killed after meeting Ed for the payoff, he learns instead that the woman's father was blackmailing a mob boss, who killed him and will kill the daughter too. But of course things are not quite that simple ... I thought this solid work. "Stag Party Girl" was a bit less successful. Ed is hired to protect a man who's being threatened by his whore/mistress now that he's marrying a rich girl. But when the mistress ends up killed at the man's bachelor party, he's the first suspect. Ed doesn't believe he's guilty, though the police do, and he keeps investigating, undercovering the sad tale of the fiancee, and eventually solving the crime -- a rather melodramatic solution turning on a psychosexual hangup that I frankly didn't buy. Finally, my favorite may have been "Twin Call Girls", in which one of a pair of sisters with the title profession hires Ed because she's been threatened with murder. Alas, before Ed can get to her, she's killed, and Ed needs to find the killer, with the help of her sister. I think I liked it because I figured out the solution right off the top, but it was one of those cases where even so working out the way the details come clear is almost more fun because you can see how they fit. On the whole I'd say a series of Ed Lincoln novels probably could have turned out fine, but perhaps it was better that Block invented Bernie Rhodenbarr and Matthew Scudder instead.

The title of the book refers not just to the experiences of (some of) the characters but to Block's self-deprecating account of how long the short stories in One Night Stands and the novelettes in The Lost Cases of Ed Lincoln took to write. I was amused by the ordering of the stories in One Night Stands -- alphabetical order by title, perhaps the first story collection I've ever seen ordered that way (not counting stories written to fill an alphabetical list.) And I should add that besides the stories themselves, Block's autobiographical introductions (to this combined volume, and to each original collection) are a very enjoyable addition.