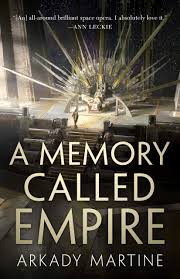 Last year, on my last business trip before the pandemic shut everything down, I started reading Arkady Martine's A Memory Called Empire. I was looking forward to it -- it had gotten great reviews, it seemed a possible Hugo nominee, and I had really enjoyed Martine's story "The Hydraulic Emperor". I got a few chapters in, and was quite enjoying it -- and then came the lockdown, and in between the psychical effects of that, and some deadlines, I put the book aside. It went on to not just receive a Hugo nomination, but to win the Hugo (and also the Compton Crook award.)

When her new novel, a sequel called A Desolation Called Peace, came out I thought to myself, OK, it's really time for me to read A Memory Called Empire! And I decided to use my recently obtained Audible subscription to listen to it. (As I did recently with Curious Toys, Piranesi, and The Stars are Legion -- using my commuting time to listen to audio books is proving a great way to tackle my TBR pile.)

Not to bury the lede too far then -- this novel is immensely fun. It is true Space Opera, from one angle a case of a huge and ever-expanding interstellar empire being resisted by a tiny and plucky space station. But it's more complex than that. Because the "resistance" of the station, Lsel, is entirely diplomatic. Indeed, there are no space battles (though my guess is things might be different in the sequel.) And Teixcalaan, the empire, is portrayed as admirable in many ways (and kind of bad in the way of empires in other ways.) It's also the story of a succession crisis, and it's the story of someone finally encountering the culture she has long admired, and learning a little about it. And it's action-packed -- the novel takes place at a full sprint lasting little over a week.

The main character is Mahit Dzmare, who arrives at Teixcalaan as the main action begins, ready to take up her duties as the new Ambassador from Lsel Station. She carries an "imago machine", which has the memories from 15 years ago of her predecessor, Yskandr Aghavn (and also his memories of his predecessor etc.) Almost as soon as she arrives she confronts two major issues -- Yskandr has died, almost certainly murdered, and her imago has malfunctioned, so she doesn't even have the help of Yskandr's experience (even 15 years out of date experience.) (And Lsel has provided her ridiculously little instruction or strategical guidance.)

Very quickly things get even more complicated. Mahit is present at a bombing, and her Teixcalaan-provided cultural liaison is injured. Mahit ends up hiding out (more or less) with one of the Emperor's closest advisors, or ezuazacats, Nineteen Adze. Mahit is nearly poisoned herself. She realizes that Yskandr had been a lover of both Nineteen Adze and the Emperor. She meets one of the Emperor's anointed co-Emperors (thus a potential successor), and she realizes that the Emperor, very old and in poor health, may die soon, and the issue of the succession is terribly fraught, with candidates including one of the Emperor's crechemates, and an influential and rich provincial man, and also the Emperor's 90% clone, who is only ten. Not to mention a would-be usurper, One Lightning, who hopes to build a military reputation, perhaps by invading Lsel Station. And the Emperor himself has a rather horrifying idea concerning his successor.

Lsel sends Mahit an urgent message, which she can only read with Yskandr's help -- which means she needs to acquire his more recent imago from his dead body, and to undergo absurdly risky surgery to integrate it with her brain. And it's clear that mysterious, hostile, and uncommunicative aliens are threatening the Empire through various jump gates, including ones in close proximity to Lsel. And her only allies, are Teixcalaan, none wholly trustworthy -- Nineteen Adze, who is clearly a political creature through and through; and then Three Seagrass and her friend Twelve Azalea, who are young and who probably have more loyalty to Teixcalaan than to Mahit.

The action really never stops. There is danger, eventual tragedy, some sexual tension and intrigue, rebellions from different directions ... The resolution is pretty powerful, and satisfying. It makes emotional sense (for several characters) and it makes strategic sense. And it's a pretty clear slingshot to the next book -- because, you know, there are still those mysterious aliens! Indeed, this is an opening volume that comes to sensible closure on its own terms, but also promises another book that should have its own surprises and revelations.

I do have -- naturally -- some caveats. The biggest ones concern Lsel Station's laughably inadequate preparation of Mahit for her job. She doesn't even get a portfolio, as it were -- that is, a clear statement of Lsel's goals. I also found rather implausible the notion that Yskandr could successfully (to a degree) perform diplomacy by becoming the lover of two of the 5 or so most powerful people in the Teixcalaan Empire. (To say nothing of the Ambassadorial ethics implied.) And there were minor nits -- not really important -- such as an early exchange in which it becomes clear that Mahit, who had spent much of her life reading everything she possibly can about Teixcalaan, has no idea they bury their dead. (The Stationers of Lsel recycle their dead, naturally -- but by burning, which doesn't really seem the best way to recycle.)

In a way, those flaws are inherent to lots of Space Opera. Intrigue and rapid action are more interesting than, months of diplomatic communications and negotiations. And this novel does intrigue -- and color -- very well. I truly love the Teixcalaan naming conventions, for example. Gender roles are not emphasized at all, but this seems to be because both Teixcalaan and Lsel seem to be all but free of gender splits of any sort. (Partly because almost all pregnancies are carried in artificial wombs -- and even conception seems technologically controlled, as the several mentions of clones of a certain percentage indicate.) I think there's a lot of room for more and deeper exploration of the cultures of both Lsel and Teixcalaan in future books, though it may be that that's not what Martine is really interested in dealing with. Which is fine -- hinted background are cooler in many ways.

I'm glad I finally got around to reading A Memory Called Empire, and I won't let the wait before reading A Desolation Called Peace be nearly as long!