Every year around this time I post one of my old blog reviews of Iain M. Banks on the occasion of his birthday ... here's another, of Look to Windward, which I think one of his best Culture novels. I wrote this about when the book appeared, and I repost it just as I had it back then. I think I was a bit longer-winded than usual in this review. 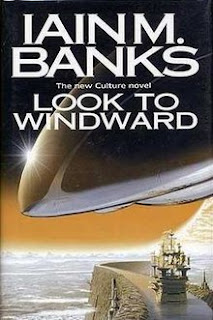 As the title hints, Iain M. Banks' latest Culture novel, Look to Windward, is connected to his first Culture novel, Consider Phlebas.  The connection is fairly tenuous: the events of the novel are largely set on Masaq' Orbital, the Hub Mind of which was formerly the Mind in charge of a combat ship in the Idiran War (which War was the subject of Consider Phlebas).  Light from a pair of novas caused by the combatants in a battle of that War, one in which the Hub Mind was intimately involved, is now reaching Masaq' Orbital, 800 years after the war.  In commemoration, the Mind has commissioned a musical piece by a composer names Mahrai Ziller. Ziller, as it happens, is an alien, a Chelgrian.  His people had an elaborate Caste system, and Ziller was a high-born who became a liberal and renounced the caste system, and who was involved in some significant political efforts which had temporary success.  But after everything blew up into a terrible civil war, Ziller left for the Culture.  The war was eventually ended in sort of a draw, after which it was revealed that the Culture had, by mistake, provoked the war.  (Contact and Special Circumstances were meddling, trying to help folks like Ziller who were trying to change the odious caste system from within, but they miscalculated how angry the Chelgrians would get, and how quickly a war might erupt.)

All this is prelude.  The book runs on three (or four) tracks, with lots of flashbacks.  This sort of intricate structure is a Banks hallmark.  One track follows a Chelgrian of a high caste, Major Quilan, who lost his beloved wife during the war.  He has been recruited for a special mission to Masaq' Orbital, ostensibly to try to persuade Mahrai Ziller to return to Chel, but apparently he has a secret mission, secret even to himself (so that Culture Minds won't be able to read his mind).  Quilan has the personality of another Chelgrian, a crusty reactionary, General Huyler, implanted in his mind via some interesting technology.  This thread mostly runs in flashbacks, as we learn about Quilan's early life and his love for his wife, the war, and then his rehab and training after the war, leading eventually to a revelation about his real mission.

Another thread is mostly in real time, following Ziller and another alien, the Homomdan Ambassador Ischlaer (Homomdans were a species loosely on the side of the Idirans in the Idiran War), as they explore Masaq' Orbital, while Ziller tries to avoid meeting Major Quilan, whom he suspects of wanting to kill him.  These sections comprise one of the most extensive descriptions of ordinary life in the Culture that Banks has yet given us, as well as descriptions of the geography of an Orbital, and of various extreme sports the Culture folks indulge in.  All from the viewpoints of two non-Culture types, Ziller and Ischlaer.  These sections are really interesting, even if largely a travelogue.

The third thread at first seems wholly disconnected from the rest.  It is set on a cool entity/construct/world called an "Airsphere", a huge enclosed ball of gas, apparently constructed millions or hundreds of millions of years previously.  Among the residents of the airsphere are extremely large intelligent beings called "behemothaurs".  These live for millions of years themselves.  Uguen Zlepe is a Culture citizen who is spending a number of years following a behemothaur (with its permission) to study its lifestyle. This thread does eventually get connected to the main plot, though I won't say how.

Eventually things come to a head, as we might predict, with the performance of Ziller's musical piece and the arrival of the light from the nova.  The actual plot resolution is just a bit anti-climactic, which is the only weakness of the story.  But it's otherwise outstanding.  There are very moving bits. There is lots of musing on the meaning of life, death, and guilt.  There is some interesting speculation about a curious fact about Chelgrian religion: they have learned to save their mind states, and after death the mind states can be uploaded into a literal "afterlife", and it is possible to communicate, to some extent, with those who have "gone to heaven".  Their traditional religion has been modified to fit with this new technology, with some unfortunate results.  In sum, a very good book, one of the best of the Culture novels.