Here's a review I wrote some time ago about Rivka Galchen's first (and so far only) adult novel. She's continued to write nonfiction, a story collection, and, just recently, a children's book, Rat Rule 79. This isn't a "forgotten" novel, though the fact that Galchen has yet to produce any more adult novels probably means it's not as well remembered as it should be, and it wasn't a bestseller ... so I'm just reproducing the review because it's a book I liked that deserves the notice.

I read and loved Rivka Galchen's short story "The Region of Unlikeness" in the New Yorker last year, and indeed reprinted it in that year's Best of the Year anthology (2009, for stories from 2008). So I bought her first novel, which also appeared last year: Atmospheric Disturbances. 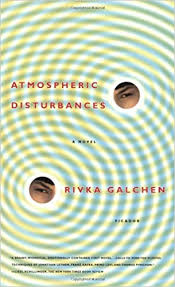 The narrator, Leo, is a psychiatrist in New York with a much younger wife, Rema, from Argentina. One day he decides that the woman who has entered his apartment is not Rema but an impostor, even though she looks and talks just like Rema. His clues include the fact the Rema has acquired a dog, and the real Rema "doesn't like dogs at all". Otherwise she's almost exactly the same -- same smell, same habits, etc. The book turns on his reaction to this "imposture", and also on his treatment of one of his patients, Harvey. Harvey believes he is a secret agent for the Royal Academy of Meteorology, charged with small scale alterations of wind patterns.

Leo had taken an unusual approach to Harvey's therapy, with Rema's help: pretending to be his superior agent for the Royal Academy, under orders from Tzvi Gal-Chen, a real Fellow of the Royal Academy of Meteorology. By this means they at least manage, for a time, to keep Harvey from wandering off across the country controlling wind patterns.

But when Leo decides that a simulacrum has replaced Rema, he also begins to take his role with the Royal Academy more seriously, including reading Tzvi Gal-Chen's papers, and attempting to send him emails. He gets a couple of responses, especially strange since it turns out Gal-Chen has been dead for years. And finally Leo heads to Buenos Aires, where he stays with his mother-in-law Magda, whom he does not know, and who is for various reasons estranged to an extent from her daughter. All this gets stranger still when Harvey and Leo continue south to Patagonia on a mission for the Royal Academy ...

This is an odd and very affecting book. It is a comedy of sorts -- at times quite funny but painfully so, and at times quite sad. It seems clear that Leo is insane (and I believe there is a condition in which people become convinced that other people close to them are impostors). (Though Harvey's belief system includes the "49 Quantum Fathers", who test weather through multiple parallel realities, opening up a hint of an SFnal explanation: that the simulacrum of Rema has by accident arrived from another reality.) At the same time he is clearly at some level unconvinced that his wife -- younger, beautiful, foreign -- can really love him, and his actions (so cruel to her) may be a working out of those feelings. Tied in are meditations on the unpredictability of weather, on Argentina's "disappeared", on quantum multiple realities, as well as issues about Rema's relationship with her mother and her (lost) father. It's very nicely written, and the two central characters are well portrayed -- an excellent book.

I noticed of course the similarity of the name Tzvi Gal-Chen to the author's, and indeed there is a  picture of Tzvi Gal-Chen and his family reproduced in the book, and comparing Gal-Chen's wife's picture with the picture of Rivka Galchen on the frontispiece of my edition certainly suggests a family resemblance. And indeed Galchen's father was named Tzvi Gal-Chen, and he was a prominent meteorologist, a fellow of the American (not Royal) Meteorological Society, and he died in 1994, just as the novel's Tzvi Gal-Chen did. I learned all this from Galchen's article on taming hurricanes in the current issue of Harper's Magazine. Galchen herself has an M.D. in Psychiatry, and has written numerous articles on scientific subjects.
Posted by Rich Horton at 8:57 PM