Until quite recently, books for children (and "juveniles") were not considered for bestseller lists, so I don't know where John R. Tunis' books might have ranked. But he was a very popular writer of sports stories for young readers, and indeed my mother (whose Master's degree was in what she called "kidlit") recommended his work to me when I was a kid. I remember reading his baseball novel Highpockets with enjoyment. In this context I can mention that a subthread of this blog's look at "Old Bestsellers" is occasional consideration of popular fiction for young readers -- in the past I've looked at a "Roy Rockwood" book, at a Tom Corbett: Space Cadet book, at a house-written book called Alice Blythe Somewhere in England (a WWI book), at a Horatio Alger book, and at YA SF by Sonya Dorman and by Richard Elam. 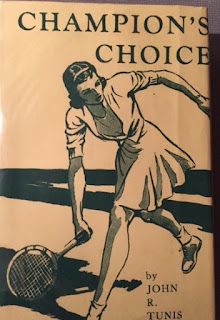 John R. Tunis (1889-1975) came from a wealthy background, somewhat diminished when his father's family disowned him for marrying a waiter's daughter, and indeed refused to come to his funeral, when John was only 7. John was still able to attend Harvard, though he later wrote an article critical of the Harvard education. After WWI, Tunis moved to Europe and became a sportswriter. He was also a very accomplished tennis player, once playing a doubles match against Suzanne Lenglen, one of the all time great woman players. Back in the US, he freelanced for a wide variety of major magazines, such as Harper's and the Atlantic Monthly. Perhaps most importantly, he wrote a regular column on sports for the New Yorker. He was also a sports announcer on radio, particularly for tennis, and was part of the first TransAtlantic tennis broadcast.

His first novel was American Girl (1929 or 1930, sources differ), described as a thinly-disguised and somewhat unsympathetic portrayal of the great tennis player Helen Wills Moody. This became a movie in 1951, called Hard, Fast, and Beautiful, directed by Ida Lupino. This was his only novel marketed for adults, though Tunis apparently objected when Harcourt Brace wanted to publish his next novel, Iron Duke (1938) as a juvenile. This was a new category (Tunis is sometimes credited with popularizing it). Be that as it may, his remaining 23 novels were all marketed for children. The bulk of them were about baseball, though a few concerned football, basketball, tennis, or track, and there were even a couple not really about sports. Tunis' books were noticeable for promoting equal participation for minorities (particular African Americans and Jews), and more generally for promoting sportsmanship, and for a skepticism about the professionalism of sports.

(I'll add that though I didn't read a ton of sports novels as a kid, I do remember a few -- besides Tunis' Highpockets, there was at least one of the Chip Hilton novels by Clair Bee, and Jack Laflin's football novel Throw the Long Bomb! Are sports novels for the YA market still a thing?)

Given that tennis was Tunis' main sport as a participant, and apparently the sport he was best known for announcing, it's a bit surprising that only two of his books were about tennis, both about the women's game. One of course was his first, adult, novel, American Girl, and the other was the book at hand, Champion's Choice (1940). Interestingly, though I haven't read American Girl, it's easy to see, based on descriptions of that book and of the movie loosely based on it, that Champion's Choice has a lot of similarity to that book (and some important differences as well, to be sure). (Indeed, some sources incorrectly cite Champion's Choice as the basis for the movie Hard, Fast, and Beautiful.) It can be argued that it is a reworking of the earlier novel for a younger audience.

Champion's Choice opens in Millville, MA, with young Janet Johnson and her slightly older friend Rodney Davis happening across a tennis exhibition. Janet becomes intrigued with the sport, and as her family can't affort membership at a tennis club, her father paints their garage door with targets so that she can practice hitting a tennis ball. She becomes a very accurate hitter, and something of a prodigy, and gets sponsored by a wealthier family to become a tennis club member. Soon she is competing at the US Junior Championships, and though she loses (in the final) to an older and better coached girl, she attracts the attention of a coach.

Her game improves rapidly (i.e., she learns to hit a backhand) and before long she's competing in the US Championships, and, surprisingly, at Wimbledon. Again she loses only in the final, and some advice from her old friend Rodney Davis, now a young businessman based in London, helps her over the psychological hump. Things progress rapidly, and in no time she's the best tennis player in the world, winning both the US Championships and Wimbledon several times in succession. (These details are in some ways consistent with the career of Helen Wills.) There are a few bumps in her road -- her father dies, and her mother suffers a severe illness, which causes Janet to make a dramatic flight in a private plane to the hospital in Millville, in between the semifinals and final of the US Championships.

Rodney, who has suffered business reversals, moves to the Far East, but not before warning Janet that the way she has learned to act to be a "champion", and to maintain her image and superiority, is harming her character. She is not too receptive to this criticism, and in the final sequence we see her in London, once again defending her Wimbledon title, and dating a dull but eligible Baronet. Then Rodney returns, and Janet is faced with a wrenching choice ...

What does she choose? Well, I think you know. That's the sort of resolution we expect from a 1940 novel, and it is kind of jarring. Indeed, the novel has a series of shortcuts -- Janet's path to the top is implausibly easy, stopped only by initial losses in finals -- as if she is never less than second best. Other things are overly coincidental -- her mother's illness, Rodney's schedule, etc. The final crisis, timed right at the Wimbledon final, seems really contrived. But it must also be said that the book is continually readable. The tennis scenes are generally plausible and well-described, And Janet's character holds together well. It is easy to believe in her, and in her reactions to celebrity. In the end, this is a pretty good YA sports book, not a great one. But maybe as good as we might have hoped.
Posted by Rich Horton at 10:49 PM