Julian Street (1879-1940) was a novelist, art and drama critic, and oenophile. He was born in Chicago, went to college in Canada, and moved to New York at the turn of the century, working for the New York Mail. He moved to Princeton in the ‘20s, and a library at the university is named for him. He married Ada Hilt in 1900, and she collaborated on the novel at hand, Tides, but not on any of his other works, but as she died in 1926, the same year Tides was published, it’s hard to say if she’d have done any more writing.

Street wrote several novels but was probably better known for his short fiction (twice he won an O. Henry Award); and for his nonfiction and criticism. His writing on wine and French cooking led to his being given the Chevalier’s Cross of the French Legion of Honor. He wrote travel books, a profile of his friend Theodore Roosevelt, a play in collaboration with Booth Tarkington. And after all that, he might be remembered best for the line he wrote, as an art critic, about Marcel Duchamp’s Nude Descending a Staircase, calling it “an explosion in a shingle factory”. 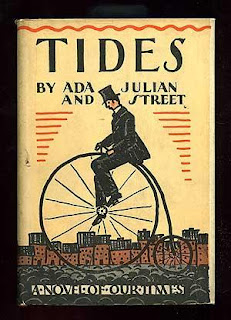 Tides appears to have first appeared in the magazine Red Book. My edition, a first (no dj, in indifferent shape), came from Doubleday and Page. It’s signed in pencil “Margaret Richardson Dec 25th 1926”, so it seems perhaps to have been a Christmas present. The book wasn't a major bestseller, and indeed Julian Street never had a book on Publishers' Weekly's yearly top ten list, but I gather that he was a reasonably successful writer in his day.

It opens in 1884 with a man named Luke Holden visiting a real estate man named W. J. Shire. They end up discussing Holden’s neighborhood, Oakland, near the lakefront on the South Side of Chicago. Holden is married with a young daughter, but soon he is expressing unseemly interest in Shire’s vulgar but pretty daughter. And Shire is planning to move to Oakland, and to try to promote it as a fashionable neighborhood (so that he can make money selling real estate there). (Oakland is a real neighborhood, still identified as such today, though I think it would be fair to say it's not currently "fashionable".)

All this is not pleasing to Luke Holden’s neighbor, old Zenas Wheelock, one of Chicago’s original settlers. Zenas likes the countrified nature of Oakland in 1884, and Shire’s plans will lead to a loss of privacy, and the gain of a lot of the wrong sort of people. Zenas has a grandson, Alan, a fine young man despite his disappointment in Alan’s father, a weak and ineffectual man only interested in buying first editions.

The story ends up being about two parallel subjects: fist, the life stories of Alan Wheelock and Luke Holden’s daughter Blanche; and the way that these two virtuous and worthy people, who it is clear love each other, mess up things so they can never be together. And second, the way Chicago becomes a major city (mostly, it seems, to its overall detriment, at least from the authors’ point of view). The first thread follows their education in a small local school, Blanche’s unfortunate home life, blighted by her father’s affair with Florence Shire, followed by his wife’s death and then his marriage to Florence, a terrible stepmother to Blanche. Luke Holden suffers financial reverses as well. Alan becomes a well-respected businessman, but somehow he and Blanche miss connections and she runs off with a dissolute would-be writer, while he marries a pleasant but weak and somewhat vulgar local girl. Their lives go separate ways, but each ends up quite unhappy in their marriages, though ultimately at least somewhat successful otherwise.

Meanwhile, in Chicago we see first the political rivalry between supporters of Grover Cleveland and James Blaine, then the burgeoning development in Oakland (including, gasp!, apartment houses), then the Columbian Exposition, and the “good” neighborhoods moving to the North Side. Some of this is played out through Zenas Wheelock’s memories and principles: his experiences in Chicago when it was purely a frontier, his despair over the fate of his previous neighborhood, especially when his old house becomes a whorehouse, his personal honesty and the way that allows people like Holden and Shire to take advantage of him as they work to cheapen their neighborhood. By the end there are complaints about the foolish young folks in the ‘20s …

As you can gather, probably, the book is ragingly classist. There are plenty of swipes at other ethnicities too, particularly the Irish and Germans. (Black people are treated with some condescension but generally regarded as good people … and Zenas Wheelock is a rock-ribbed Republican partly, perhaps mostly, because Abe Lincoln freed the slaves.) For all that, it was fitfully enjoyable. There are boring stretches, to be sure, and lots of ad hominem sort of attitudes, or conveniently bad behavior by the wrong sorts of people which proves the authors’ points. But there’s also a certain honesty in showing its two heroes making real mistakes and messing up their lives – though not to the point of real tragedy either. And the details about Chicago late in the 19th Century ring true, and I found them interesting (partly because I grew up in the Chicago area).
Posted by Rich Horton at 9:17 PM