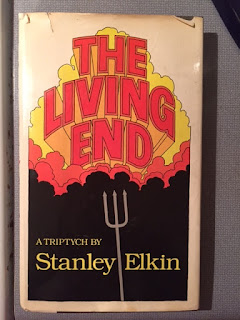 Let's transition out of Anthology month with a sort of quasi-collection: a triptych of closely related stories that together make up a book, not quite of novel length. Stanley Elkin's The Living End comprises three stories, originally published in American Review, Antaeus, and TriQuarterly, as "The Conventional Wisdom", "The Bottom Line", and "The State of the Art". The titles themselves are sort of linked: they are quite conventional idiomatic phrases concerning something similar: an ordinary, quotidian, belief or situation. The stories are of a length, 10,000 words or a bit more, so the whole book is novella length, maybe 32,000 words. This also continues my habit of encountering a significant writer by reading a pretty short book.

I had some interest in Stanley Elkin because of some slight similarities in our biographies. Very slight, really. Elkin, though born in Brooklyn, grew up in Chicago, and I grew up in the Chicago suburbs. Elkin went to the University of Illinois, as I did, about a quarter-century later. And Elkin moved to St. Louis after school, and lived the rest of his life there, as a Professor at Washington University. I also moved to St. Louis after school, and have lived there ever since (though I'm not a Professor). He wrote ten novels and a few collections of stories and novellas, plus a number of essays. He suffered from multiple sclerosis. He was a very well-regarded writer critically, though he never sold all that well. He won two National Book Critics' Circle awards for Best Novel. He died in 1995, aged 65.

The Living End opens with Ellerbee, the owner of a liquor store in Minneapolis, worrying about his two employees who have just been shot at his store. He vows to hlep their families, and indeed does so in exemplary fashion, against the wishes of his wife. He even fends off the offers of sex from the wife of one of the men. And he is resistant to his wife's belief that the criminals must be black men. He's quite the virtuous man -- in an uncynical fashion. And all this does him little good when the criminals (mobsters) return to his store and kill him. Somehow Ellerbee ends up in Hell (after a visit to Heaven which he finds underwhelming, more of a theme park.) Ellerbee's lot in Hell is, well, eternal suffering, but his will is unbowed, he continues to rebel against the capricious God who placed him there.

Ellerbee encounters some people he knows in Hell, particularly Ladlehaus, one of his murderers. The second section concerns first him, as he ends up by mistake returned to life, sort of: he goes back to his body, but his body is still buried. In this form he can do nothing but complain, and eventually torment one Quiz, the groundskeeper at a high school football stadium built over Ladlehaus' grave. Quiz becomes the focus, and his concerns about the boys who play in his bailiwick -- and then he dies as well, of an unexpected heart attack.

The final section, eventually, focusses on God himself, as well as his Son and frustated Joseph and the Virgin Mary and her motherly affection for one of Quiz' young boys, who himself unfairly ended up dead and in Heaven. The burden, in the end, is why God is who he is, and why he, not really so much on purpose, torments so many.

The novella is, as may be clear, fundamentally comic, if rather blackly so. And it's quite funny at times. It is not ever really convincing theologically -- Elkin's heart is clearly not in it in that sense. (Elkin was Jewish, and the God depicted here is mostly the Christian God (with nods to other traditions), and anyway he really just seems to be going through the motions in his satirical treatment of the deity.) What distinguishes this book is Elkin's prose, which is quite comically extravagant. I enjoyed reading it -- at some level, though, I confess I was more interested in Ellerbee's life story than in the concluding 2 and half sections set mostly in the afterlife -- though there was much of interest there, mostly, as I note, prosodically.