A (mostly) Forgotten SF Novel: ... And All the Stars a Stage, by James Blish

... And All the Stars a Stage, by James Blish 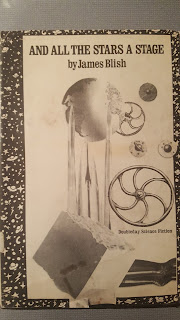 James Blish was one of the most influential writers and critics of SF in the midcentury. He was born in 1921, and his first story appeared in 1940 in Super Science Stories, placing him in a remarkable constellation of writers born about the same time who began publishing at the same time as well: Isaac Asimov, Frederik Pohl, Cyril Kornbluth, and Damon Knight among them. Blish, like all of those writers, was a member of the sometimes controversial fan group the Futurians. His work throughout the ’40s had little impact – perhaps most important were a couple of stories that he reworked later into more significant pieces: “Sunken Universe” (1942, as by “Arthur Merlyn”) and “The Weaknesses of R. V. O. G.” (1949, with Knight). His first novel appeared in 1951 (“Sword of Xota”, in book form as The Warriors of Day), followed very quickly by many more. Many of his most famous stories appear in two series: the Okies stories, of star-traveling cities, began in Astounding with “Bridge” in 1952, and the Pantropy stories, collected as The Seedling Stars, begin with “Sunken Universe”, but took flight with “Surface Tension”, in Galaxy in 1952. His novel A Case of Conscience won the Hugo in  1959 – it was expanded from a 1953 If novelette. So 1952/1953 was pretty important for Blish, especially when you add his seminal 1953 short story “Common Time” to the ledger.

He also wrote a great deal of criticism, originally in fanzines, as by “William Atheling Jr.”. I don’t think the pseudonym was ever much hidden – still, Blish did on occasion review his own work, not sparing it: he criticized his 1957 Astounding serial “Get Out of My Sky!” for its abrupt turn to a psionics theme – he accused the author of pandering to editor John W. Campbell’s tics, and I suppose he knew! (It’s quite obvious that something like that happened when you read the story, which starts out wonderfully and falls to silly pieces in the second half.) Blish’s criticism was collected in three books: The Issue at Hand, More Issues at Hand, and The Tale That Wags the God.

Blish was also an early advocate of an SF writers’ organization (which led eventually to the Science Fiction Writers of America). A perhaps less-noted influence was his Star Trek books: he began a long series of “novelettizations” of Star Trek (original series) episodes in 1967 (though the latest books, even though they appeared under his name were written by his wife Judith Ann Lawrence and (some say) her mother). He also wrote the first Star Trek novel aimed at adults, Spock Must Die! (1970).

All in all, a career that certainly would have culminated in a Grand Master award, but alas he died aged only 54, in 1975, of lung cancer. (He was a heavy smoker, and indeed spent some time working for the Tobacco Institute.)

I have, along the way, read nearly his complete novels – omitting only Dr. Mirabilis, Spock Must Die!, and his two collaborations (The Duplicated Man (1953), with Robert A. W. Lowndes; and A Torrent of Faces (1965/1967), with Norman L. Knight.) I’ve also read much of his short fiction. He was an extremely uneven writer – I love his best work (for me, The Seedling Stars, A Case of Conscience, and such short stories as “Common Time”, “A Work of Art”, “Tomb Tapper”, “Beep”, and the late “A Style in Treason”). And much of the rest of his stuff was very enjoyable as well, including Cities in Flight, VOR, and the engaging if silly juvenile Welcome to Mars. But he also wrote some truly dreadful stuff: the paired juveniles The Star Dwellers and Mission to the Heart Stars, the non-SF juvenile The Vanished Jet, The Warriors of Day, and perhaps especially The Night Shapes are each nearly unreadable, and sometimes downright offensive. Only Michael Moorcock among significant SF writers seems to me to show such a puzzling range of quality.

I read … And All the Stars a Stage when I was quite young, probably 14 or 15, in the 1971 Doubleday edition. I remember enjoying it, and being impressed by the notion of a matriarchal society and how it arose (birth control and sexual selection of children, basically), but not much else. So when I got a copy of the June 1960 Amazing Science Fiction, with part 1 of the serial version of the book, I figured I’d reread it in that form. I searched out the July issue, and read both parts. In the process I noticed something interesting: the serial is accompanied by a notice: “This novel will be published in the fall by Signet Books under the title Crab Nebula”. I had never heard of a Blish novel with that title. Had they decided to stick with the original title after all? But I checked the ISFDB: no mention of Crab Nebula, nor any book publication of … and All the Stars a Stage until 1971.

So what happened? I asked around, and Gregory Feeley, first-rate SF writer and critic and an authority on Blish, told me that the book had been commissioned by Truman Talley at Signet, but that Talley didn’t like it and rejected it. Eventually it sold to Doubleday. There was an edition from Faber and Faber in England, and a 1974 Avon paperback. Late in his life Blish wrote an essay, “A Bad Idea Trampled to Death by Ducks”, about the troubled publication history of the book, which was not one of his favorites among his work. (The essay was published in Vector 9 years after Blish’s death.)

I found a copy of the Doubleday edition (formerly the property of the U. S. Army!) to compare with the serial. The copyright page says that a “somewhat abridged version of this novel first appeared in Amazing”, however, I could find no obvious changes in comparing the book and serial, and a quick and dirty word count suggest the two are about the same length (a bit over 50,000 words). Greg Feeley has seen Blish’s manuscript that went to Doubleday, and says it was mostly just the tearsheets from Amazing, with perhaps a few small additions. The title is a bit inconsistently presented: on the cover of the Doubleday edition the ellipsis is omitted, but it's back on the title page, and apparently it's entirely gone in the Avon edition.

So, I’ve gone on and on about Blish, and about the publication history of this novel. What should I say about the novel itself? It’s probably fair to note that it really isn’t, in the end, all that interesting, though to my mind much better than his worst books.

It opens with Jorn Birn, a young man in a matriarchal society, depressed over his status as a drone in a world in which the only real opportunity for a man is to join the harem of a powerful woman. He notices an ad for a mysterious sounding job, and on impulse he decides to apply. He gets the job, after learning that it’s a dangerous one: testing an interstellar spaceship. One of the leaders of the project is a beautiful woman who seems to immediately hate Jorn. We can see where THAT is going, though Blish totally underplays it: much later in the book come the sentences: “Jorn and Ailiss were married the next day. Somehow, there was nothing else to do.”

Soon after he joins the team working to form crews for the spaceships being built, he learns that there is a driving reason for this project: scientists have learned that the Sun is about to go nova. They plan to build a huge armada, but their plans are disarranged when it becomes clear that the Sun will explode much sooner than originally expected. Between the compressed schedule, and the rioting that occurs when the world’s population learns how few people will be able to escape, only a small subset of the originally planned fleet is built, and they just barely escape and head into space.

Here I must make a confession: all along I thought this book was set a couple centuries in the future on Earth. There is no reason in the first half or so to doubt this (except maybe the unlikely notion that our Sun would become a supernova … but was this that well known in 1960? I can’t remember.) But after the armada sets off, we learn that in fact Jorn’s world was much different than Earth (only not really): one of a system of 116 planets orbiting a blue giant (yet with a Moon much resembling our Moon, on very brief description). That fact, along with the originally planned title of the novel, Crab Nebula, pretty much gives away where the book will end.

Anyway, things continue to go poorly on the desperate flight. Some of the other spaceships fail or one reason or another. Others go out of contact as the armada spreads and spreads. Potentially habitable planets are rare. We do get extended episodes exploring two promising planets, both the homes (or once the homes) of fully human people, but both end in utter failure for quite different reasons (interesting but implausible in the first case, less interesting and slightly more plausible in the second case). As society aboard the spaceship declines – it’s not really a generation ship, because Jorn’s people have developed much extended lifespans – it becomes clearer and clearer that any landfall must suffice, and … well, I won’t give away the ending, but it is easy enough to guess in some ways, though there is a bit of a dying fall to Blish’s execution.


It’s an odd exercise. Blish throws away some fairly interesting ideas, such as the “familiars” that most men on Jorn’s planet have become attached to. He seems thoroughly uninterested in the social and personal interactions of the characters, except occasionally to make a point. Structurally there’s a somewhat uneven division in two: the first half about the project to build the starships, the second about their somewhat depressing actual flight. I don’t really think any of Blish’s notions ever cohered into a real novel: the end result is not unreadable, but a very minor part of his overall oeuvre.
Posted by Rich Horton at 6:56 PM