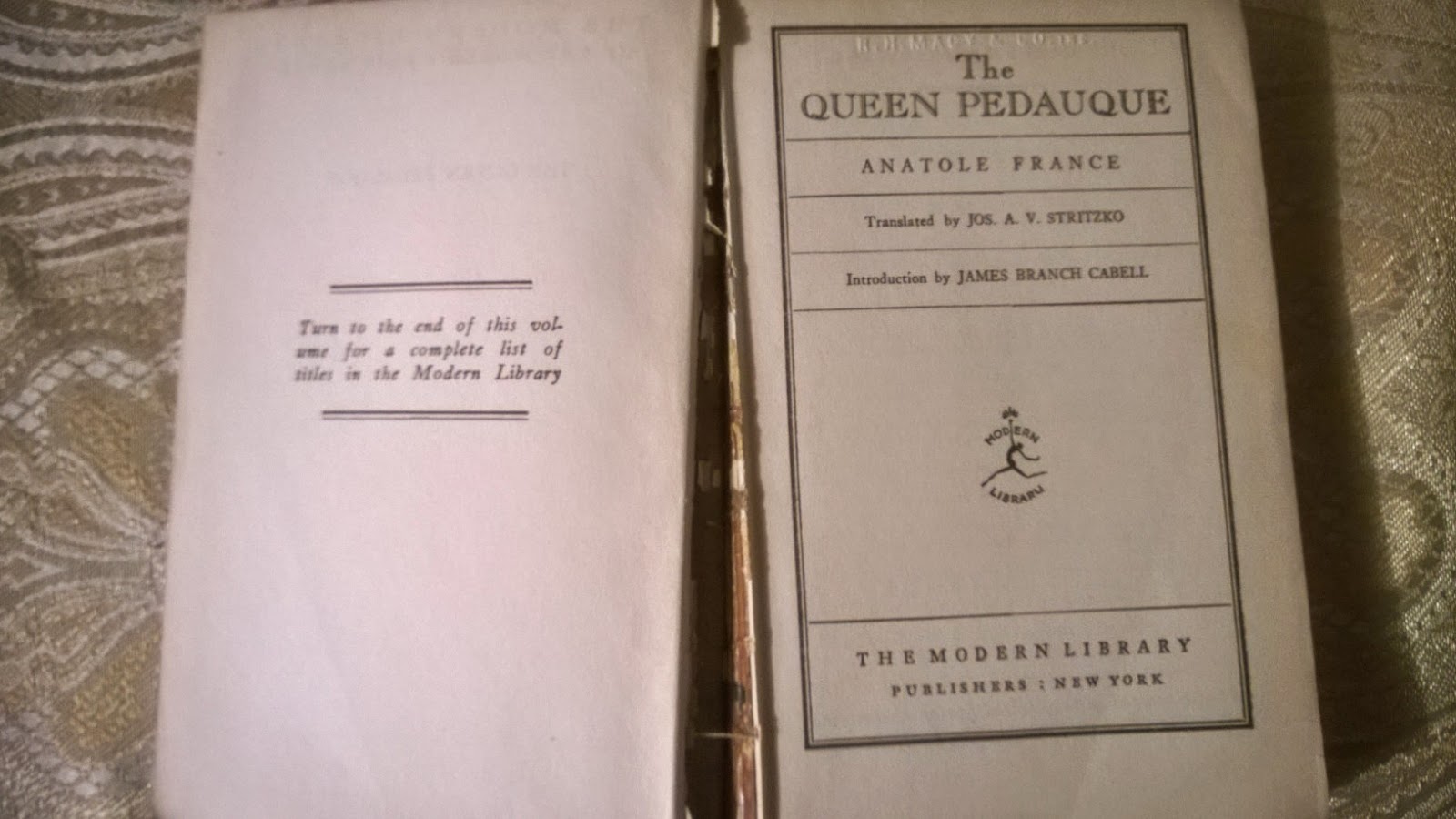 This week I'm going back into my archive of reviews of older books for a book that doesn't quite fit the parameters of this series -- it's old, and it was probably a bestseller or nearly one, but it was published in France, by a man named France. In fact, Anatole France (1844-1924) was a major figure in French letters (no, not THOSE French letters!), a member of the Académie Française, and winner of the Nobel Prize for Literature in 1921. His best known novel might be Le Crime de Sylvestre Bonnard  (1881). Other well known novels include Thaïs (1890), which was the source material for the Jules Massenet opera, and the book at hand, La Rotisserie de la Reine Pedauque. It is my sense that his reputation has declined somewhat in the past century or so, though I'm not sure -- perhaps in France he is still highly regarded.

The Queen Pedauque was first published in 1892 as La Rotisserie de la Reine Pedauque. My edition is a tatty 1926 Modern Library edition, translated by Jos. A. V. Stritzko, with an introduction by James Branch Cabell. There was a sequel of sorts, The Opinions of Jerome Coignard.

It's the story of a young man in the late 1700s, Jacques Menetrier, the son of a cookshop owner (the cookshop is called "The Queen Pedauque), who falls under the sway of a somewhat rascally cleric named Jerome Coignard.  Coignard freeloads at the cookshop for a while, teaching young Jacques Latin and other things.  After a while they are jointly hired by a dotty nobleman, M. d'Asterac, who employs them translating some ancient documents.  D'Asterac believes in alchemy, and to that end also employs a Jewish man named Mosaide, who claims to be a 135 year old Kabbalist.  D'Asterac furthermore is constantly propounding his theories of "salamanders" and "sylphs", spirits of fire who will come if called, and who are the only worthy lovers.  When he has Jacques call a salamander, Mosaide's beautiful niece shows up by coincidence, and soon becomes Jacques' lover.  Before long, Jacques is in further trouble, as his one-time object of devotion, the lacemaker Catherine who (it is hinted) was previously Jacques' father's lover, tries to lure Jacques into a relationship, embroiling him in rivalry with a nobleman and with the merchant who is keeping Catherine.  The plot is resolved when the merchant breaks in upon a wild party involving the nobleman, Jacques, Coignard and Catherine.  At the same time Mosaide, who hates Christians, becomes convinced that Coignard has compromised his niece's virtue (which the book hints might be the case, although it is Jacques and later Jacques' noble rival who actually commit the acts that Mosaide directly lays at Coignard's door).  All flee, and by mischance Catherine ends up on her way to Canada, Coignard ends up dead, and Mosaide's niece throws over Jacques for the nobleman, who after all can offer her a lot more in the way of material possessions.  Jacques ends up a bookshop owner.

The core to the story is not the plot, though, but the sly nature of the telling, and the character of Coignard.  Throughout there are hints that more is going on than Jacques is either aware of, or willing to tell us of (he is the narrator).  Coignard's philosophy is a rather odd version of Catholicism.  One of his major tenets is that to properly repent, one must properly sin, and he seems to have missed few chances in his life of properly sinning.  Though apparently a priest (though once again, Coignard's assumption of the title abbe may be his own story, and not the Church's doing, it's hard to tell), he is a womanizer, a card cheat, and a thief. He's also a legitimate scholar, and always interested in knowledge as well as cadging a good meal.  The book is slyly funny throughout, also pretty exciting, and at times just strange.  It is marred mainly by the anti-semitism of the treatment of Mosaide, though I'm not sure but that France was in this way mocking the harsh and morally wrong views of 18th Century Frenchmen. (I also caught France in a curious anachronism: he has Coignard refer to the greatness as a writer of French of Balzac.  But the book is set in 1770 or so, certainly before 1789, and Honoré de Balzac was not born until 1799. Unless there is another Balzac? (And as BV Lawson notes in the comments, there was another Balzac, and perhaps that is who France meant.)