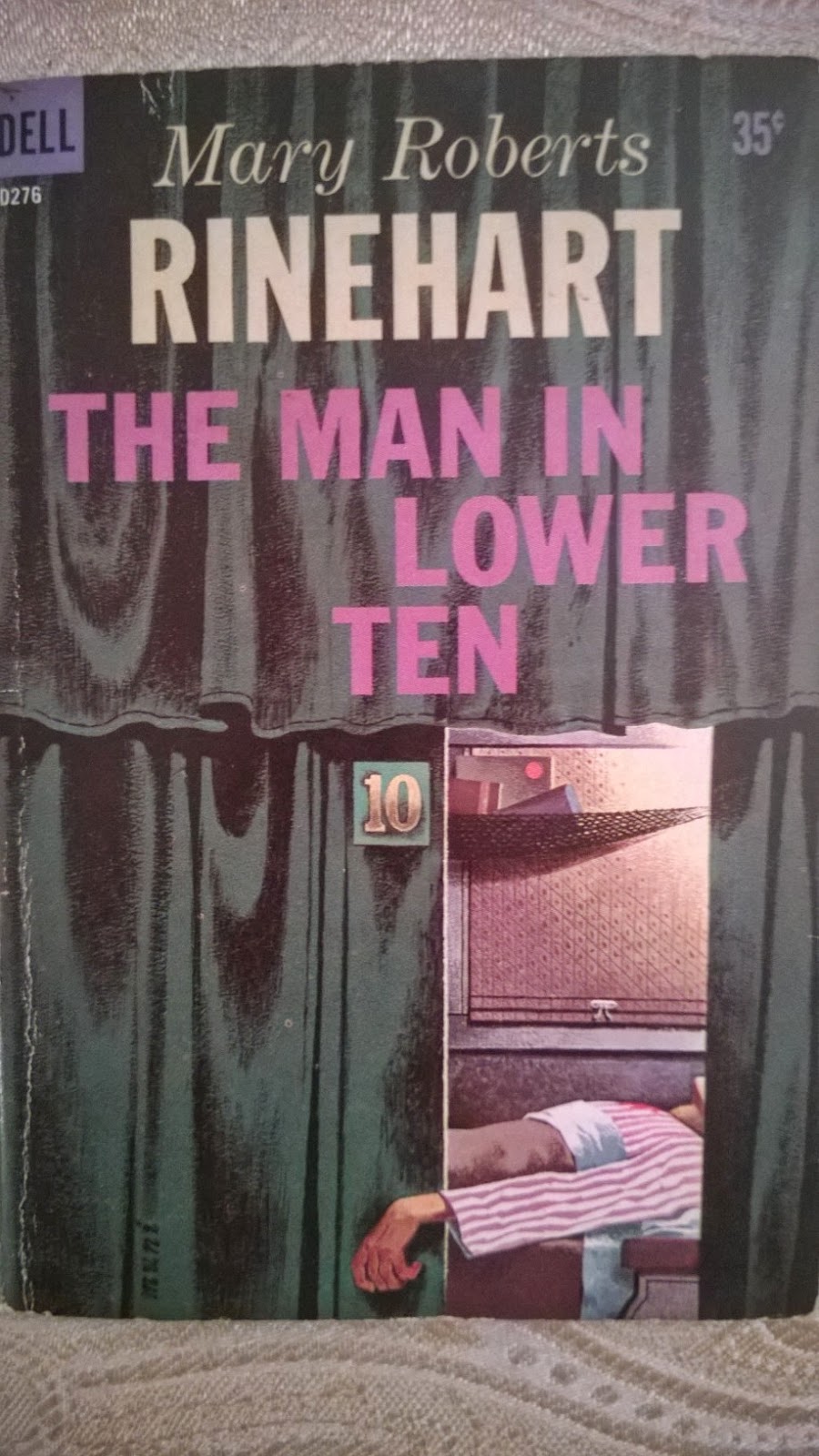 The Man in Lower Ten, by Mary Roberts Rinehart

Mary Roberts Rinehart (1876-1958) was a very popular mystery/suspense writer in her time, and her fame, while slowly dwindling, seems to me, has not disappeared. I certainly was aware of her in the '70s when I was reading Agatha Christie and the like. I confess I'd have guessed she was closer to a contemporary of Christie's, and that she was still alive in the '70s. (For that matter, I sometimes have confused her with Mary Higgins Clark.) Rinehart was often called "the American Christie", but that was really unfair to her, as she started 15 years or so before Christie (who was 12 years her junior) and was quite popular well before Christie even began writing.

Rinehart was born in (what is now) Pittsburgh, trained to be a nurse, and married a doctor, Stanley Rinehart. She began publishing stories in the downmarket magazines of the time in 1904, to help her family's finances after the stock market crash of 1903. Her first novel was the one covered here, The Man in Lower Ten, which was serialized in All-Story Magazine in 1906. (Her second novel, The Circular Staircase (1907) is often sloppily called her first, as it was the first to become a book.) The Man in Lower Ten was published in book form in 1909, and it was the fourth bestselling novel of that year according to Publishers' Weekly. It is considered the first novel clearly in the mystery genre to become a general fiction bestseller. My copy is a 1959 Dell paperback, complete with interior illustrations.

A bit later I ran across an early hardcover reprint as well -- I had hoped on first seeing it that it might be a first edition, but instead it's a Grosset and Dunlap reprint from perhaps 1913. It is also illustrated, by Howard Chandler Christy. I've reproduced (in photographs by my son Geoff) the cover, and title page with frontispiece, below: 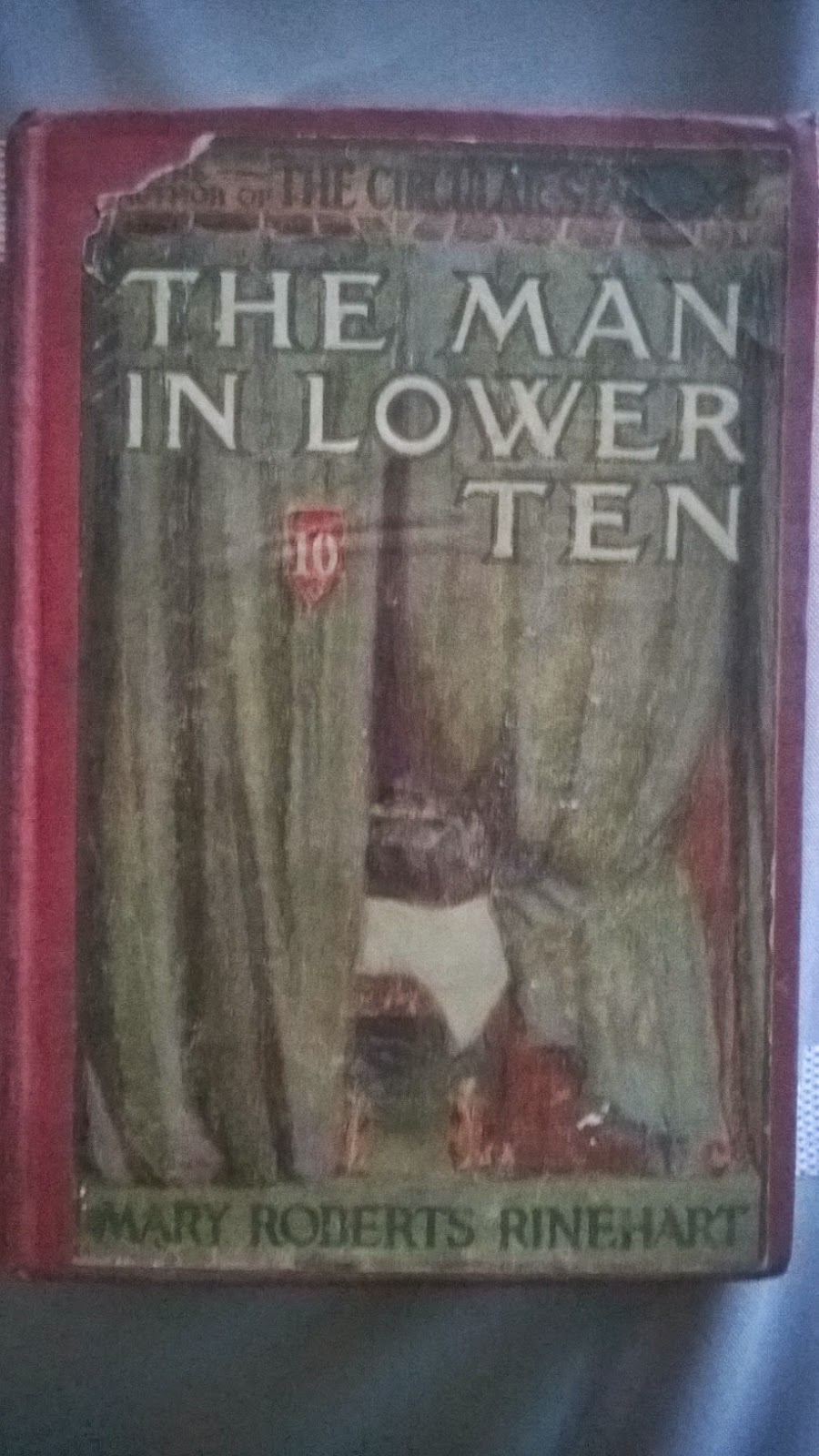 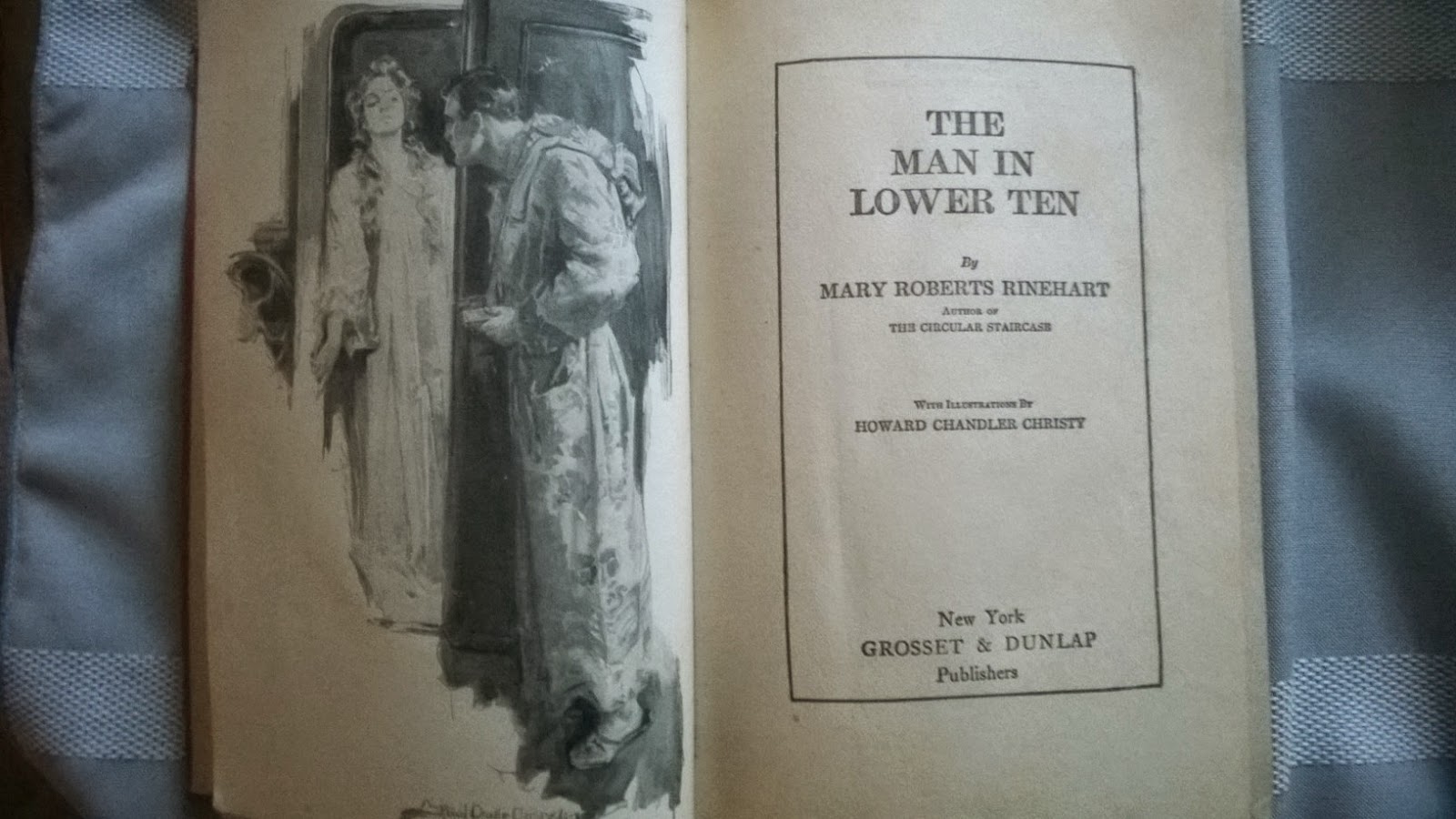 Rinehart diversified somewhat in later years, writing Broadway comedies, nurse fiction, and mainstream novels. (The latter apparently at the urging of her husband, who seems to have been a bit ashamed of her reputation as a trashy genre writer. He also apparently eventually resented the fact that she made much more money than he did.) By the end though she returned most often to mystery/suspense stories, and those are by far her best remembered works. I can recommend an excellent website by Michael Grost (mikegrost.com/rinehart.htm) for a detailed analysis of her career.

One tidbit about Rinehart that is often repeated is that she originated the phrase "The butler did it". This is untrue, though in one of her better known novels the butler is indeed the murderer. But there were novels and stories in which the butler was the murderer before that, and she never used that exact phrase.

Lawrence Blakely is a Washington, DC, lawyer. His partner, Richey McKnight, inveigles him into taking a trip to Pittsburgh to take a deposition from a rich old man in a forgery case. It seems McKnight has a date with a girlfriend. Girls are famously of no particular interest to Blakeley ...

On the way back from Pittsburgh, strange things happen. There is repeated confusion over which bunk Blakely has engaged. There are a couple of interesting seeming people on the train. Blakely ends up forced into another bunk by a drunk passenger, and when he wakes up, his bag -- with the critical deposition -- and also his clothes are gone. He is forced to dress in another man's clothes, and in searching for his bag he discovers a murdered man.

Almost immediately Blakely is the prime suspect -- but before anything further happens the train crashes. Blakely is thrown free, and indeed is one of only four survivors, sustaining only a broken arm. He and another survivor, a beautiful young woman, Alison West, escape to a farmhouse where something unusual happens that Blakely doesn't understand for some time. He does realize, however, that a) Alison West is the granddaughter of the rich old man from whom he took the deposition; b) she is another prime suspect in the murder; and c) he is in love with her.

Blakely returns to DC but soon his troubles multiply. The police are lurking around his house. Another survivor from the wreck fancies himself an amateur detective and insists on investigating the otherwise almost moot murder case (after all, the witnesses are mostly dead and the victim could have been written off as merely another casualty of the train crash). Someone seems to be lurking in the house next door. And, finally, it seems that Alison West is the girl whom his partner McKnight has been seeing.

The shape of the resolution is not surprising, and indeed the solution to the primary crime, while not ridiculous, does seem a bit strained. But the novel bounces along nicely enough. Lawrence Blakely is not exactly a convincing three-dimensional character, but he's still kind of intriguing, and his voice, as teller of the story, is effective. Rinehart's writing is not brilliant, but it's solid storytelling prose, with some good turns of phrase. She does slip once or twice (for example, Blakely's arm heals for a brief passage before returning to its broken state), but really it's a solid professional effort. I liked it, though I have to say, not enough to make a special effort to seek out more of Rinehart's work.