Old Bestseller Reviews: Half a Rogue and The Best Man, by Harold Macgrath 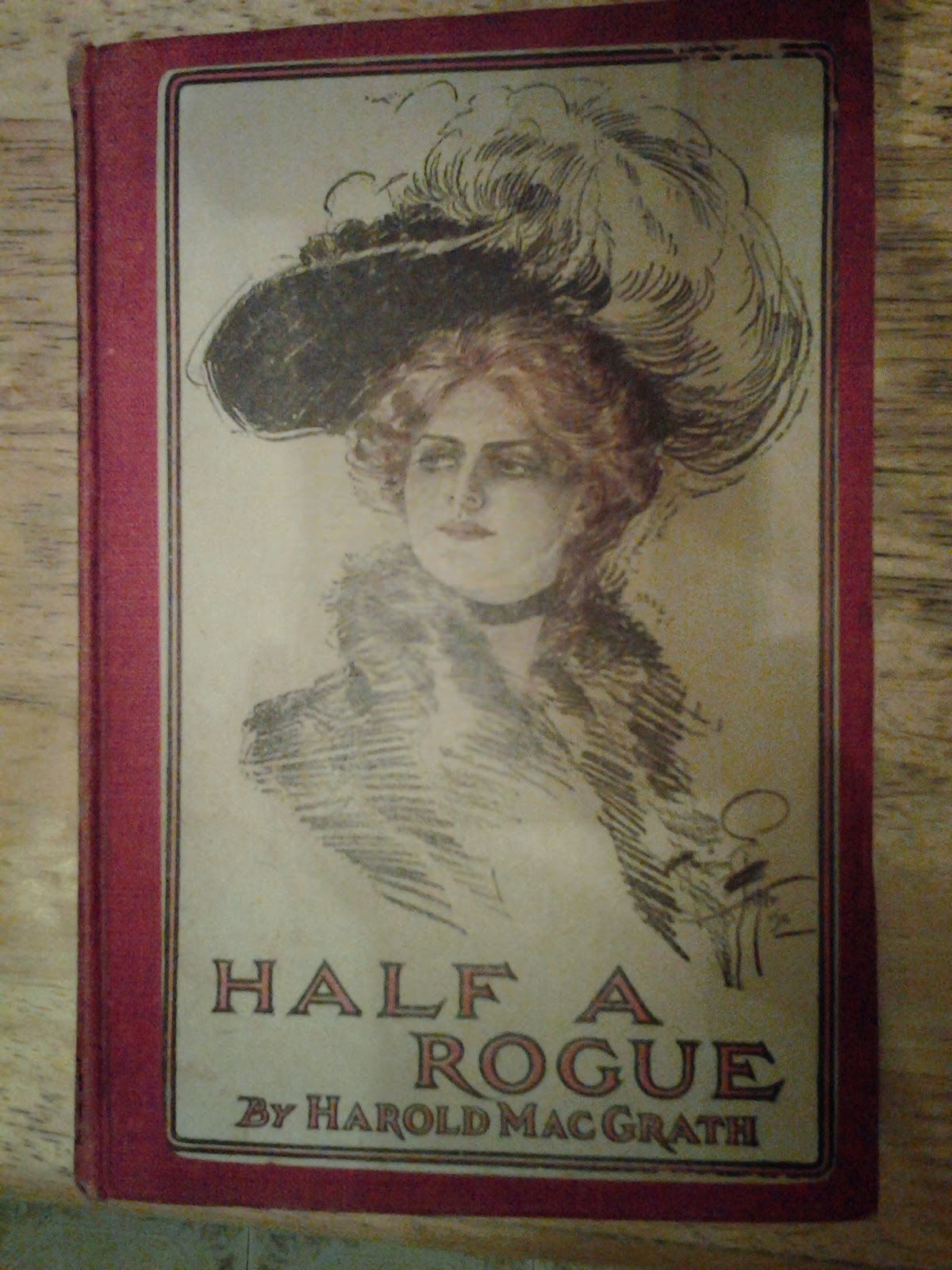 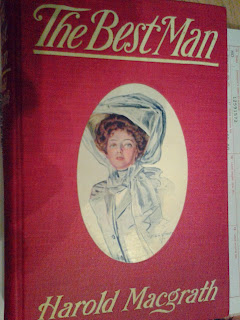 Half a Rogue, by Harold Macgrath

Half a Rogue was published in 1906, by Bobbs-Merril. It was the tenth best-selling novel of that year. I found a Grosset & Dunlap reprint of the book. Harold Macgrath (or MacGrath, spellings vary) was a novelist from Syracuse, New York, and an early writer for films. He is all but forgotten today, despite reputedly having originated Boris Karloff's stage name. (Karloff was born William Henry Pratt, and MacGrath's 1920 novel The Drums of Jeopardy, which was filmed twice (in 1923 and 1931), featured a mad scientist named Boris Karlov. However, William Henry Pratt apparently used the name Boris Karloff as early as 1912, so if anything the inspiration for the name in MacGrath's novel may have run the other direction.)

The book is short (perhaps 80,000 words), and on a brief scan looked like it might turn sexily on a love triangle or quadrangle, so I thought it might be fun. And to be fair, it reads quite breezily, and holds the interest OK. But it's full of cliche, both in the writing and in the characterization. There's some offensive characterizations of ethnic groups, particularly Italians and Irish (no mention of black people) -- I suppose par for the course in popular fiction of that era. There's also a notable classism -- there's a strong sense that we are to be led by "gentleman", though to be sure the main character is the son of a potato farmer, a self-made man -- but still, it's clear, a "gentleman".

Anyway, the novel opens curiously with playwright Richard Warrington approached in a restaurant by a young woman, who it seems cannot pay for her meal, due to a sad story concerning her father's bad habits. Of course he pays for it (the gentleman), and then it turns out she's an actress who can't get a fair hearing, and this her means of proving how talented she is. As it happens, Warrington is looking for a new lead for his latest play, because his current star is insisting on changes to give her a more flattering role, and that would ruin his art. This made me think the story would be set on Broadway at the turn of the century ... but then suddenly we are several years in the future. Katherine Challoner, the actress he had hired in the first chapter, comes to him with news -- she is getting married, and will leave the stage. There is a hint of romantic entanglement in the past between Warrington and Challoner, but nothing came of it (their hearts were not truly engaged). Meantime Warrington is pondering a very flattering letter praising his work -- from an anonymous very young woman. And then his old University friend, the rich businessman John Bennington, visits and asks him to be his best man -- for he will be married soon. Of course it turns out that Bennington is in fact marrying Katherine Challoner ... and (gasp!) Katherine left her gloves with Warrington when she came and told him of her plans to leave the stage and get married.

The wedding of course will be in Bennington and Warrington's common home town, Herculaneum, in upstate New York. (It seems overtly modelled on MacGrath's home town, Syracuse.) The scene shifts quickly there. A few threads are set up. In one, the local social leader, Mrs. Franklyn-Haldene, an odious woman, begins to plot to make sure that the soon to be Katherine Bennington will not be able to upstage her social position -- after all, an actress! In another, Warrington, who comes to stay with his beloved Aunt, who raised him after his father died (his mother having left at his birth), again meets Bennington's much younger sister, Patty, and an attraction quickly blooms. (Warrington, no surprise, soon discovers that it was Patty who had written the anonymous letter of praise that he so treasured.) In a third, Warrington is recruited to run for Mayor, to oppose the entrenched candidate, who is the tool of an odious man named McQuade, who uses his influence to arrange for corruptly awarded city construction contracts. And in the fourth, Bennington's steel mill is threatened with a strike because he employs a non-union engineer, who, even worse, is British, and worse still, is perfecting a labor-saving device.

Naturally all these threads converge. Bennington's association with Warrington means that his business decisions may throw votes to the other guy. McQuade plots to ruin Warrington's reputation, and his eventual tool is to suggest that Warrington and Katherine Challoner had an affair. Patty's love for Warrington is threatened if she too believed that her new sister-in-law (whom she loves) was previously involved with her new paramour. And the same scandal that may affect Warrington's reputation of course also affects Katherine Bennington's -- which plays into Mrs. Franklyn-Haldene's hands.

At times the novel reads a bit like Atlas Shrugged, at least in John Bennington's attitudes. (His response to the strike is to close his business.) But more than that it's a lightly sketched paean to a man who is hardly portrayed as even a tenth of a rogue, let alone half -- instead he's rather implausibly perfect. The romance with Patty is underwhelming, and the "scandal" of his relationship with Katherine has no legs at all for a contemporary reader. Perhaps back in 1906 a woman visiting a man's apartment twice (as far as I can tell) ... a man with whom she had a professional relationship ... would be shocking. For me, I think the novel would have been much better if (as I had assumed at first) Katherine and Richard had been lovers, but realized they didn't love each another enough to live together ... if John and Patty each had to adjust to that fact ... but no. The story of political corruption is somewhat unsatisfactorily resolved as well: Warrington and Bennington, after discovering damning information about McQuade and his tools, are too much the gentlemen to ruin him as he deserves -- they just hope to use the knowledge to neutralize him in future. Hmmmph. Still, as I said, the novel didn't bore me, and there is a sweet closing scene. It never convinces, it's full of cliches, but I can see why MacGrath had readers. After all, he was a far better writer, line by line, than Dan Brown. (Though to give Brown his due, Brown appears to have a much better plotty imagination.)

I will mention briefly that I also ran across a collection of short stories from Macgrath, The Best Man (1907). (My copy is an A. L. Burt reprint of a Bobbs-Merril original.) It comprises four not terribly long stories: “The Best Man” (12000 words), “Two Candidates” (6000 words), “Mr. “Shifty” Sullivan” (7200 words), and “The Girl and the Poet” (2800 words) – that's a total of less than 30,000 words, a pretty slim book. “Mr. “Shifty” Sullivan” was previously published in Ainslie's Magazine – no previous publication is credited for the other stories. “The Best Man” is about a man in love with a woman who is convinced he will lose her because he has discovered that her father is guilty of financial bad dealing. “Two Candidates” is a morality tale about two men running for office, both apparently decent people, both of whom are faced with seemingly unimportant temptations to support their political backers' interests. It's kind of obvious stuff, but not too bad really. “Mr. “Shifty” Sullivan” is about the visit of a prizefighter to dinner at a society woman's house, and the surprising knowledge the local Rector shows of boxing. And “The Girl and the Poet” is about a failed poet and the woman he loves. These are all slightish pieces, and quite obvious in their messages, and plots too, but they are decent entertainment.
Posted by Rich Horton at 7:50 PM