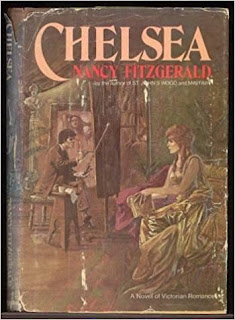 Chelsea is a romance novel from 1979, published by Doubleday. The Regency was the default period for sweet historical romances back then, but Chelsea is set in the Victorian Era, in fact, exactly 100 years prior to publication, in 1879. I could find nothing online about the writer, Nancy Fitzgerald. The endpapers claim she's a full time writer living in Venice, CA, with her daughter, Shaw, and a cat; and they mention a previous job at the Los Angeles Museum of Art. The books, which I found at an estate sale, is a Doubleday hardcover. (There was a paperback edition.) She published two previous novels, also with titles evoking London geography: St. John's Wood and Mayfair. This book is concerned with the art world -- given her Museum experience, I wonder if the others were as well. I could not find any evidence of any novels besides those three, but Sean Wallace came to the rescue. It seems Fitzgerald's real name is Waverly Fitzgerald. She has published a number of nonfiction books, five humorous mysteries co-written with Curt Colbert as by Waverly Curtis, other mysteries under her own name, other historical fiction, and some short stories. She also teaches writing.

The nominal protagonists of the book are Cecily Hawthorne, a beautiful redheaded orphan who is serving as a governess; and Devin Shepard, a noted portrait painter, friend of all the famous painters of that time (Rossetti and Landseer and Morris and Alma-Tadema and Leighton and Millais and so on -- lots of name dropping though no convincing portrayals of the actual men). Shepard, who seems to be very well off, has just seen off a mistress/model and needs another one for his planned Royal Academy show entry. It so happens that when he tells his butler what sort of woman he wants for his picture, the butler mentions Cecily, who is in a very unsuitable situation (evil mother, nasty child).

Somewhat unconvincingly, Shepard finds Cecily and convinces her to come model for him. Things go nicely for a while, with (predictably) Cecily finding herself attracted to Shepard, but determined to preserve her virtue. She lucks into a different governess job when she gets made enough at Shepard to leave.

And then the real plot of the book is set in motion. Cecily's new place is with a silly woman, Mrs. Fluster, who has had an unexpected child in her 40s. Her first two children are a nice but plain girl who loves cooking, and a useless boy who has no interest in his father's business. The father had somehow lost control of his business, and the new owner is running it into the ground, and thus the family is close to bankruptcy. Their only hope is an American heiress who shows some interest in the boy. The household also includes a maid and a footman as comic relief -- and the two are besotted with each other.

The other key family is the Hollys, a fairly well to do but not really rich family with a plain daughter who is 32 and unmarried -- preventing her several sisters from marrying their various suitors. The mother decides that Devin Shepard would be a worthwhile husband -- but the daughter, Constance Holly, another plain but worthy woman, is convinced Shepard sees nothing in her. Add a young gigolo type who preys on married woman and who is chasing Mrs. Fluster; and a prig of a clerk who has decided he loves Cecily, though once he meets Mrs. Fluster's daughter he falls for her -- but can't give up his obsession with Cecily.

The arc of the novel is pretty clear -- the clerk will end up with the Fluster girl and will save the family business because as a clerk he at least understands business; Constance Holly and the gigolo type unexpectedly fall in love; the younger Fluster boy will end up with his American heiress; and the maid and footman of the Flusters will, after comical problems, get together. And of course Devin and Cecily will finally get together -- at the Royal Academy show in which Devin's picture of Cecily is exhibited.

That's just romance novel convention. But the novel doesn't really work. It wants to be a comedy, and tries and tries but so much of the comic business is overdone, and falls flat. The best comic character, Shepard's butler Willett, really doesn't have enough to do. The Fluster's maid, who befriends Cecily, is supposed to be really funny but mostly she just leadenly uses the wrong words. Mrs. Fluster and Lady Holly are likewise supposed to be funny but again, they are just labored cliches. The two plain young woman, Joconda Fluster and Constance Holly, are actually likeable characters, but minor. And Cecily and Devin are essentially ciphers -- their "romance" has no chemistry, it just doesn't convince.

One might also have hoped that the historical details would be solid, but they really don't work well either. As I noted, the artistic milieu is just sketched in -- name dropping -- I never believed it. And there are some howlers, as well. For example, the book is set in 1879, and Oscar Wilde is given a scene, which is perhaps not entirely impossible but seems unlikely, as he really didn't get established as an artistic figure until 1881. More seriously, the Fluster boy is supposed to be a candidate to buy a commission in the Army -- but the selling of commissions was ended in 1871.

All in all, this is a pretty weak example of the then flourishing romance genre. It does seem that Fitzgerald may have found her real metier in other genres since then, however.