I would say this Birthday Review is belated, but I imagine Tim Powers is used to his birthday being celebrated a day late, as he was born on Leap Day. This is what I wrote about Declare back in 2001 -- it's one of my favorite of his novels, though I still consider The Anubis Gates, one of my favorite novels ever, as his best. 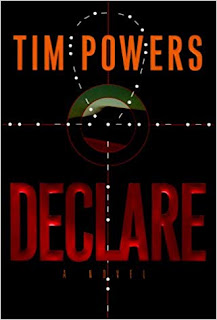 Tim Powers' Declare was my vacation reading this year [2001], which isn't really great for a book because I don't do that much reading on vacation -- too much time in the car, or at touristy spots, and besides, hotel rooms are typically not well set up for comfy reading. So it took me a while to finish -- possibly not the best thing for a book. Still, I liked it.

It opens with a brief scene featuring a British Intelligence Captain driving a Jeep down Mt. Ararat in 1948, fleeing the deaths of several of his comrades. Then we switch to 1963, and we meet Andrew Hale, who, we learn soon enough, was that Captain in 1948. He's a lecturer in English at a University, but his past in Intelligence has caught up with him. He's told by secret means to meet with his mysterious supervisor/recruiter at the shady, unofficial, branch of the British Intelligence that he has been a member of, and he learns that he is being provided with a rather uncomfortably cover -- he's being charged with treason and murder, which will make his flight to Kuwait and subsequent offer of his services to the Soviets more credible. The real reason for all this is that in 1948 his mission was to foil whatever the Soviets were trying on Mt. Ararat -- but while he managed to foul up their plans, they also fouled up his plans, in part due to the treachery of Kim Philby, so that the potential for the Soviets to achieve what they want remains -- and now, in 1963, they are ready to try again.

From there the story proceeds on multiple timelines. We learn in flashbacks of Hale's past -- his mysterious birth in Palestine, his Catholic upbringing by a single mother in the English countryside, his recruitment into a curious side branch of British Intelligence and his first assignment -- to let himself be recruited as a Soviet agent, to work in Nazi-occupied Paris in 1941. In Paris his partner agent is a beautiful young Spaniard named Elena Ceniza-Bendiga,and she and Andrew fall in love, but she makes clear that her first allegiance is to international communism. So when the Nazis find them out, and they escape and are ordered to Moscow, presumably to be killed as blown agents, he ducks out on her and returns to England, where he learns, more or less, what's really going on. There follow episodes in Berlin in 1945, where Hale meets Elena again, as well as Kim Philby, the highly placed spy who Hale has always disliked and mistrusted.  The three meet again on Ararat in 1948, when Hale learns conclusively that Philby is a traitor, and also becomes convinced that Elena has learned to hate him.

A parallel path follows Hale's adventures in the Middle East in 1963, as he manages to get recruited by the Soviets for theor new attempt at -- I won't say what -- on Mr. Ararat. This involves trips to mysterious cities in the desert, meetings with curious entities, and another meeting with Elena and with Kim Philby, who has finally been exposed publically as a spy, and who is looking for escape -- either to France or Russia. Finally, as we have known, the strange operation called Declare will be resolved, one way or another, on the slopes of Mt. Ararat, near a curious long buried wooden object -- perhaps a ship.

The book is always intriguing, and full of clever supernatural ideas. The central supernatural entities here are djinni -- which Powers links to fallen angels. He ties this in with the true stories of Kim Philby and his father, and with T. E. Lawrence, and with some mysterious cities in the Arabian Desert, and with meteorites, and spies, and Catholicism. I found this all well-imagined, and consistent and comprehensible in a way that, for example, the ghosts in Expiration Date never managed to be for me. There is also the love story between Elena and Andrew, which is well-told and very well resolved, but which didn't fully work for me, as the emotional element of it never quite came to life for me. I think the other slight weakness in the novel is a certain implausibility in some of the spy stuff -- basically, it seemed to me that Hale's cover would never have held up as well as it did -- the Russians would have got just a bit skittish, and shot him out of hand. Not that I'd know. Powers also manages to work in some of his other recurring themes -- poker, and the injured hero, for two. It's a very solid effort, just a whisker short of being exceptional, and it takes a place in my pantheon of Powers' books at the second level -- below my favorite, The Anubis Gates, but ranged somewhere with The Stress of Her Regard and On Stranger Tides as among the next best.
Posted by Rich Horton at 5:27 PM