Engaging the Enemy, by Elizabeth Moon 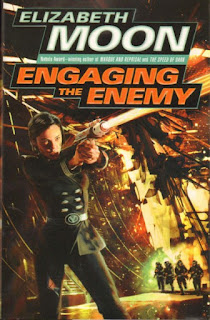 Engaging the Enemy is the third in Moon's current series collectively called Vatta's War. I really liked Moon's first Mil-SF series, the Heris Serrano/Esmay Suiza books that eventually ran to 7 volumes. And I am really enjoying this series as well. That said, this book is pretty clearly a middle book, a chapter in a serial.

Ky Vatta is one of a few survivors of the successful interstellar trading company Vatta Transports. The bulk of that company was murdered in a coordinated attack by pirates in league with the government of their home planet, Slotter Key. Now it is clear that the pirates are attempting to control all of human space: they have destroyed much of the ansible network that connects various systems (all of which independent countries, basically), and they have taken over at least a couple star systems. Ky has managed to escape a couple of attempts on her life, and to defeat the pirates in a couple of small encounters. She has captured one pirate ship, the Fair Kaleen, which was captained by the slimy Osman Vatta, a cousin who was booted out of the family due to his nasty ways. Ky has also linked up with her beautiful cousin Stella, another survivor, and she assigns Stella to be captain of her original ship. And it wouldn't be a Moon space opera without Aunts in Space[tm], so back on Slotter Key, Aunt Grace, who is assumed to be a half-mad old bat, is working against the corrupt parts of the Slotter Key government.

The bulk of this book concerns Ky's attempts to organize resistance to the pirates, mainly by recruiting other privateers (Ky has a letter of marque from Slotter Key) to join her in forming an impromptu space navy. She is hindered in this by stupid governments who think the pirates will leave them alone if they just ignore things, and too by the individual crotchets and bloody-mindedness of the privateers. Stella is mad at her for various reasons as well, and then she runs into an old captain for Vatta who shockingly claims that she must be an imposter -- possibly a daughter of Osman Vatta who is impersonating the real Ky Vatta. The resolution to this last thread is a nice twist on what we expect. The other thread about the privateer navy leads to a nice concluding space battle. And back on Slotter Key Grace has made some progress in her attempts to root out the bad guys in local government and to begin rebuilding Vatta's position on planet.

I liked it because I like these books and this story and I root for Ky and Stella and Grace. That said this isn't the place to start -- begin at the beginning, with Trading in Danger. This latest book is mostly setting things in place for future books, which I imagine will involve bigger and better space battles, and interesting revelations about the bad guys (who are as usual for Moon pretty evull).
Posted by Rich Horton at 6:47 PM