Ben Bova turns 87 today -- and he's still actively writing, with his novel Earth having appeared this past July. (James Gunn is 96 and also actively publishing -- I can't think offhand of another still active SF writer as old.) Here is one review I did of his 2001 novel The Precipice, first in the Asteroid Wars series, as well as two very early stories (his first two, I believe), and two later stories that I reviewed in Locus.

The Precipice, by Ben Bova 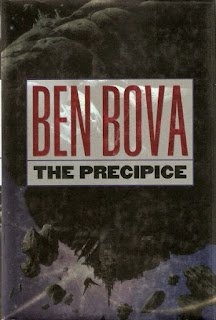 Ben Bova's new novel, which on internal evidence seems to be related to his recent [Insert Name of Planet Here] series (officially called The Grand Tour), as well as to the Sam Gunn stories, and other Bova books (I had no idea!), is "The Precipice", just serialized in Analog.  I believe the book version is due from Tor any time now.  I haven't been reading Bova's novels lately, but I thought having the serial in front of me was a reasonable opportunity to try one. It's pretty much what you might expect -- a solid and fun adventure, with best-sellerish two-D characters, and some strident politics, pro-Space and anti-radical Environmentalism. The villains are really Evull -- they are caricatures. The heroes are a bit better, if not exactly wholly rounded -- but at least they have both good and bad points, indeed, at times they are rather stupid.

The book opens with the US (indeed the world) in environmental chaos, due to the Greenhouse Cliff (or the Precipice of the title) having been reached. But even though the Greens were right about the Greenhouse effect, they, along with other basically evil bureaucrats, resisted means of solving the Greehouse problem: mainly nuclear power, industrialization of space, and nanotech.  One of the main heroes is Dan Randolph, the 60ish head of Astro Corporation, who is depicted in a rather unnecessary scene as trying to rescue the former US president, and his lover, Jane Scanwell, as she tries to help refugees from flooding and earthquakes in Memphis.  The whole bit about his affair seemed wasted -- I suspect it might be tying up loose ends from earlier books.

Soon he is fielding a proposal from his slimy rival Martin Humphries, to try to develop a small fusion powerplant which will open up the resources of the asteroids to humanity, if it can be made to fit a spaceship. And we're off, as Dan's company, mostly on the Moon, rapidly (kind of like Tom Swift, only slightly more plausibly) develops said spaceship, while Dan appoints two women to be the pilots. One is our other protagonist, Pancho Lane, a savvy black woman with a mission to make enough money, by means fair or foul (but only slightly foul, she has standards), to be able to save her sister's life. The other woman is the incredibly beautiful Amanda (I forget her last name). And soon Dan and Pancho are fighting off threats from Humphries and the various regulators in a race to reach the Asteroids and claim some rocks in time to save Astro Corporation from bankruptcy, and also save the Earth.

It's a fast and enjoyable read, if you kind of ignore the broad characters (the main villain turns out be not just a slimy thieving corporate raider, not just a murderer, but naturally a sexual prevert with designs on Amanda too), and the conveniences such as an invisibility suit showing up just when needed. Certainly not great stuff, and not to everybody's taste, but fun.

Finally, "The Long Way Back" was Ben Bova's first published short story, though a juvenile novel, The Star Conquerors, appeared from Winston in 1959. Bova ended up writing a great many science articles for Cele Goldsmith, and a few stories. This one is also post-apocalyptic, and somewhat didactic, and the hero is a middle-aged man who has been recruited to repair a power-satellite to beam power to a small enclave of survivors. His price is help investigating the ruins of the cities to recover more knowledge -- but he realizes that he has been betrayed: no one will help him, and in reality he doesn't have enough oxygen to survive the trip back to Earth. But should be betray the whole world? He finds a solution that will benefit the remaining survivors, but not in the way they had planned. The message is pretty solid, but the story is executed somewhat clumsily.

Ben Bova’s “The Towers of Titan” turns out to be only his second published short story. (The first sale was also to Cele Goldsmith — “A Long Way Back,” Amazing, February 1960). He did publish a Winston Juvenile, The Star Conquerors, in 1959.

The Star Conquerors“The Towers of Titan” is a minor piece (and does not seem to have been reprinted except in one of the Sol Cohen super cheap reprint ‘zines.) Dr. Sidney Lee is a respected scientist who had a breakdown when confronted by the mystery of the mysterious towers on Titan – alien machinery that has been operating for a million years.

At last, he returns, kindling a relationship with a lovely woman scientist (who looks a bit like Carol Emshwiller according to the illustrations), and taking over leadership of the ongoing investigation, all the while convinced that the machines are the product of malevolent aliens. It ends with a sudden revelation about the machines’ purpose (that revelation in itself not too bad an idea).

Ben Bova's "Sam and the Flying Dutchman" (Analog, June) is a Sam Gunn story. These are usually quite amusing, and this one delivers, as Sam flees marriage and tries to help a damsel in distress.

The March Amazing Stories, #609, is available only in electronic form. I hope this magazine gets back on its print feet -- it's been a promising publication so far. This issue includes a Sam Gunn story from Ben Bova, "Piker's Peek", reliable entertainment from a veteran, as Sam inveigles a bitter rival into investing in a Lunar resort project.
Posted by Rich Horton at 5:15 PM