Birthday Review: I Love You, Beth Cooper, by Larry Doyle

I Love You, Beth Cooper, by Larry Doyle

I reviewed this novel back when it came out primarily because I almost knew the author. Larry Doyle was a year ahead of me at the University of Illinois, majoring in Biology while I majored in Physics. He was also from a Chicago suburb, though one nowhere particularly close to mine. He wrote for the Daily Illini (and did a comic strip, too) and I thought he was pretty funny, in a typical snarky undergraduate way. One of my best friends also wrote for the Daily Illini, so they knew each other, though they, er, weren't close. (Euphemism for "two cynical people really didn't get along at all"!) His birthday is tomorrow. Here's what I wrote about his first novel: 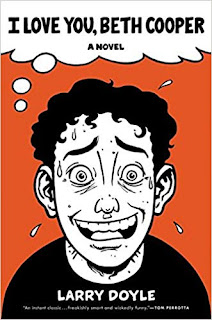 I finally got around to I Love You, Beth Cooper, a 2007 novel by my near classmate at the University of Illinois, Larry Doyle. (Doyle has also written for Beavis and Butthead and The Simpsons and done screenplays such as Looney Tunes, the Movie.) This is a comic novel about a nerd, Denis Cooverman, graduating from high school, who gets to give the Valedictorian speech, and bravely interjects a declaration of his long felt crush on the uber-popular cheerleader Beth Cooper.

This leads to problems, needless to say. Denis and his movie-geek friend Rich (who he just outed, sort of, in the speech) are planning a typical boring night together watching movies in lieu of graduation parties, but when Beth reacts, while not positively, not quite negatively, to his comment, he invites her to his "party" -- and to the boys' shock, she, and her two hot friends, show up. Which leads to alcohol consumption. Which leads to visiting another party. Which leads to threats -- carried out -- of mayhem from Beth's Iraq vet (and sociopath) boyfriend. Which leads to a chase around the suburbs. And which leads to ... well, lots of stuff.

It's sort of a book variant of Superbad (or of numerous other teen coming of age comedies -- Sixteen Candles, even, speaking of stuff from the Chicago suburbs?). And it's very funny. It's also pretty honest about its characters -- just a bit sentimental at times, not always terribly realistic, and TV-paced, but not so much so as to be completely unbelievable. It's set in the suburbs of Chicago -- not the part I grew up in (rather, of course, the part Doyle grew up in), but recognizable enough to me to resonate. Lots of fun.

I Love You, Beth Cooper eventually became a movie, though not a very successful one. Doyle's second novel was Go, Mutants!, from 2010. A movie is supposedly in development based on that novel (which I haven't read.) Doyle has also contributed to the New Yorker's Shouts and Murmurs section -- I've read some of his stuff there.
Posted by Rich Horton at 6:47 PM