Alfred Coppel, born this date in 1921, wrote a number of stories in the late '40s and early '50s for the SF pulps, but mostly abandoned the field after 1956. There was one more story in If in 1969, and at the same time he expanded his enjoyable space opera novella "The Rebel of Valkyr" to the also enjoyable four volume YA Rhada series, beginning with The Rebel of Rhada, written as by "Robert Cham Gilman". In 1983 he published an alternate history of World War II, The Burning Mountain, in which the US has to invade Japan. Then in the '90s he published a well-received Space Opera trilogy, the Goldenwing Cycle, beginning with the novel Glory. In the mean time he was working in other fields, as he had from the beginning of his career, and he had one major bestseller, Thirty-Four East (1974). Coppel died in 2005. 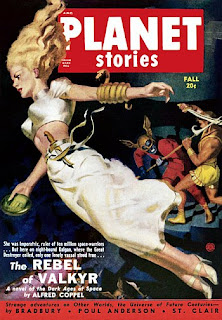 Coppel's '50's SF was not terribly memorable for the most part, but quite professionally executed. I'm including the bits and pieces I've written about his stories. Alas, I don't have anything on my favorite, the gleefully silly "Rebel of Valkyr", which can be found in Brian W. Aldiss' excellent 1976 anthology Galactic Empires, Volume One. I can, however, reproduce the delightful cover of that issue! (I don't know who painted it, alas.)

The other stories include a longish (8500 words) short story by Alfred Coppel. I quite enjoyed Coppel's Rhada series (as by "Robert Cham Gilman"): a YAish Space Opera set complete with horses in the holds of spaceships. These were based on a story from the Fall 1950 Planet Stories, "The Rebel of Valkyr", as by Coppel. Despite this Space Opera, much of Coppel's early 50s SF was more techy in nature, including the story to hand: "Star Tamer", in which a guy starts a "booster" business on the moon, and in an emergency comes up with a new orbit, dangerously close to the Sun, as the only way to get vaccine to Europa in time. (Good thing no teenaged girl stowed away!)

"Task to Luna" by Alfred Coppel uses a variant on a plot I've seen before: Americans and Russians race to the Moon in order to establish a beachhead for Cold War purposes, only to find that the aliens who show up are a much greater menace.

Alfred Coppel's "The Guilty" is here to fulfill the official requirement that every issue of every SF magazine in the 50s have a Nuclear War story. This one is about the entire population of the US committing suicide in guilt over having obliterated the Soviet Union (even thought the Russians struck first). Very sanctimonious.

Vortex was one of the worst SF magazines of all time. They published only two issues, in 1953. They may be best known for featuring Marion Zimmer Bradley's first two professional sales, in the second issue. The first issue notably featured three writers who made their reputations after leaving the SF field: Milton Lesser, who wrote mysteries as by Stephen Marlowe; S. A. Lombino, who wrote mysteries as by Evan Hunter and as by Ed McBain; and Alfred Coppel. (Both Lesser and Lombino eventually legally changed their names to their more prominent pseudonyms (Hunter in the case of Lombino, instead of McBain).)

"Homecoming", by Alfred Coppel (9500 words) -- after a pointless nuclear war a man tries to return to his wife and kid, only to find them bombed out -- luckily for him he gets to trade up to a younger model, but virtuously only commits to her after mourning his wife. (My cynicism is unfair -- the story is well-enough done, its main weakness being a complete lack of surprises or any hint of originality.)


"Love Affair", by Derfla Leppoc (1100 words) -- a robot falls in love, sort of, with the last surviving human woman. Note the absurd pseudonym (Alfred Coppel spelled backwards), adopted apparently to disguise the fact that Coppel had two stories in the issue.

From a review of Fourth, edited by Gordon Van Gelder

Next is Alfred Coppel's "Mars is Ours" (F&SF, October 1954), a bitter extrapolation of the Cold War to Mars – as purely a 50s story as one could ask for, but still resonant.
Posted by Rich Horton at 8:16 AM