Birthday Review: How to Live Safely in a Science Fictional Universe, by Charles Yu

Charles Yu turns 45 today. His second novel, Interior Chinatown, just won the 2020 National Book Award for Fiction. Much of his earlier work, including many short stories and his first novel, is SF, or SF-adjacent. (I reprinted one of those stories, "Standard Loneliness Package", in my 2011 Best of the Year volume.)

For his birthday, here's a review I did for SF Site of his first novel, How to Live Safely in a Science Fictional Universe. 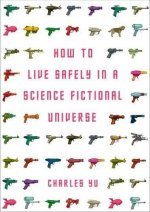 Charles Yu is a young writer whose first book, the story collection Third Class Superhero, gained a lot of praise in literary circles. But he's one also a guy who grew up reading Isaac Asimov. He has professed admiration for the likes of Richard Powers, who writes literary novels -- but also sometimes SF, and almost always scientifically-engaged work. So, what is How to Live Safely in a Science Fictional Universe? Actually, that's an interesting question.

On the face of it, why doubt the SFnality of the book? The story concerns a 30ish guy named Charles Yu, who is a "certified network technician" working as an "approved independent affiliate for Time Warner Time". This means he fixes time machines. The story also concerns time loops and paradoxes and parallel universes. Pure SF, right? And indeed, so it is, at that level. But what is the novel really about? It's about a somewhat drifting young man, who misses the father who left years ago, and who occasionally visits his lonely mother, and who has never met the right woman to marry, and who is stuck in a dead-end job. Pure mainstream, right?

At bottom, such definitional questions don't matter very much. What Yu is doing, simply enough, is using some SFnal tropes in support of purely mainstream aims. That does affect the audience, of course. The novel isn't really interested in the mechanics of time travel, nor in a fully plausible future. Nor should it be. It's interested in the main character, and in his mother, and in his time machine's operating system (look, SFnal tropes again!) who has the personality of a sweet woman he's never really noticed while mooning over the girl he never married. And most of all, it's interested in Charles Yu's relationship with his father, an immigrant to the US, who struggled for years in his garage to invent a time machine and make something of himself. And who disappeared after his invention failed and someone else beat him to it.

But all that said, the novel isn't just another boring mainstream book about a guy trying to understand his father*. The SFnal furniture really does make things work. We know from the start that everything turns on a time loop engendered by Charles Yu killing his future self, and on the paradox that the book we are reading is a book he could only write by reading the book his dying future self gave him. Charles' mother is stuck in a time loop herself, reliving one of her few happy moments, or so Charles believes. And the entire "Minor Universe" in which the action takes place is a satirically altered version of our world -- or perhaps it is somehow our world? -- a minor universe slightly damaged in construction. The SFnal tropes, then, are not interesting as Science Fiction, per se. We don't care that this novel isn't in any serious way about the possibility of time travel. But the tropes work to help tell the story, and to make serious points about the central characters, and satirical points about the "real world." And that's as good a use as any.

I haven't said a whole lot about the plot of How to Live Safely in a Science Fictional Universe, and I don't think I have to. The book works not because of plot but because of voice, character, and a humorous but bittersweet attitude. It's not an earthshakingly brilliant book, but it's a very enjoyable first novel, from a writer with real chops.

(*Let's take it as read, shall we, that there are plenty of wonderful, not boring, mainstream books about a guy trying to understand his father.)