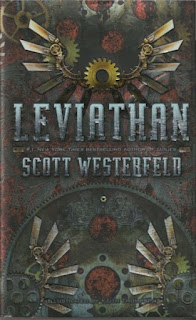 Scott Westerfeld’s Leviathan is a thoroughly delightful Young Adult novel, the first in a series that is based on World War I, but in an alternate history. In this history Charles Darwin discovered the genetic basis for evolution, and how to manipulate it, and as a result the United Kingdom and its allies have a society based on biotechnology, such as the title airship, a huge beast (or colony of organisms) based on whale DNA and much more. By contrast the Germans and Austrians and their allies, called Clankers, use Steampunk flavored machinery: airplanes and zeppelins, but also great walking land war machines.

The novel is told through the point of view of two teens. Aleksandar is the son of the murdered Serbian Prince Franz Ferdinand and his lower-class wife, and as such is not eligible for the throne, but is still a threat to the powers that be. As the novel opens he is spirited away by a pair of loyal retainers, who fear that the people who arranged for Alek’s parents to be killed will be coming for him. They take a smallish “Walker” and head for Switzerland, fleeing the German army that should be on their side. Meanwhile Deryn Sharp, a girl who has grown up loving to fly the living balloons based on jellyfish genetics, has disguised herself as a boy and joined the Air Service. She ends up a midshipman on the whale-based Leviathan, which is ferrying a valuable but mysterious cargo from England to Turkey, just as war is breaking out.

As we might expect their paths cross … And, in reality, nothing is resolved in this book, no mysteries even unveiled. That will wait for subsequent books, which this reader anticpates eagerly.

The novel is in many ways a familiar YA construction: a hidden Prince, a disguised girl, both people who need to grow up and are being forced to do so in a dangerous situation. The book delights in part because both protagonists are nicely depicted and fun to follow and root for. It also delights in the depiction of the rival, unusual, technologies of the Darwinists and the Clankers. Westerfeld is very good with plausible invented words, and with plausible (to a sufficient degree, at least) inventions, particularly his biological inventions. (The Clanker tech, after all, though different to ours, is still by and large familiar.) There is plenty of exciting action as well. And an intriguing mystery – with the hint that the War may play out a bit differently than in our world – which hold the interest in this book and make subsequent books much to be looked forward to.