James Wallace Harris writes the excellent blog Auxiliary Memory, in which he discusses many different things, including such subjects close to my heart as SF (and short SF), and also forgotten popular fiction. One of his interests is a writer named Lady Dorothy Mills, who wrote popular travel books and novels mostly in the 1920s. James has a webpage about Mills: Lady Dorothy Mills , and recently posted about her on his blog. Here's a post he wrote for the site Book Riot about Mills, as reprinted on his blog: The Resurrection of Lady Dorothy Mills, in which he mentions her 1926 SF novel Phoenix, which he compared in theme to Bruce Sterling's Holy Fire. He wondered if anyone in his circle had read the latter -- and of course I had, and I knew I'd reviewed it, and I realized I'd never reposted my review after my old webpage went away.

So here is that review, from way back in 1996, one of the earliest book reviews I posted. (And next, try to find a copy of Phoenix -- which might not be easy! Though it should be in the public domain next year.) 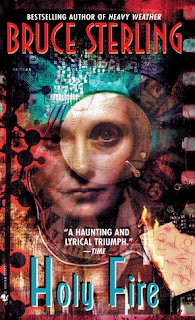 Holy Fire is a pretty impressive novel. Sterling really packs ideas onto the page! He furnishes his setting with detail after telling detail: there is a much greater sense, seems to me, that the future being depicted is really in the future, and not just now + a few changes, as in so many SF books. And the details are cleverly backgrounded: offhandedly mentioned here, revealed by a turn of phrase there, implied by a description...(Also, he does stop and lecture on occasion: but the lectures are interesting, not distracting, and important to his story.) Anyway, the way Sterling does this stuff is great fun (in his short fiction too), and he's pretty good at little jokes on the one hand, and telling aphorisms on the other hand.

Holy Fire is set 100 years in the future, and the main character is a woman born in 2001 (a symbolic date, I'm sure; as the fact that the book opens with the death of her former lover, born in 1999, is symbolic too). This woman, Mia Ziemann, after attending her lover's "funeral", and receiving a mysterious "gift" from him (the password to his questionably legal Memory Palace) (a MacGuffin if there ever was one!) undergoes a crisis of sorts and decides that it is time to cash in her chips, as it were, and undergo the radical life-extension treatment which she has been planning. She comes out of the treatment a young woman in appearance, and a different person in attitude, and with a different name (Maya). As a result, she runs off (illegally) to Europe, trying to live the life of the late-21st century young people (it seems). The rest of the book follows her somewhat rambling adventures with a variety of Europeans, young and old, as well as eventually getting around to the meaning of the MacGuff -- er, I mean, Memory Palace.

The book is very strong on the description and rationale for the culture and economics of a future dominated by medical treatment, life-extension methods, and (as a result of the previous two), old people. Sterling knows that if people live a long time, society will be very different, and he does a good job showing us one way it might be different. His views of both young (say, up to 60 or so) and old (up to 120 or more at the time of the book) people are very well done. Part of the book is an attempt to get at what the difference between a society of very-long-lived people (like up to 150 years or so), and a society of near-immortals (up to 1500 years or more) might be: and here he waves his hand at some neat ideas but kind of fails to really convince.

Throughout it is readable, interesting, and funny. The resolution is solid, though as I have suggested, he waves at a more "transcendental" ending, and doesn't really succeed there. But Maya's story is honest and convincing, though Maya as a character is a little harder to believe. She seems to be whatever the plot needs her to be at certain times: this is partly explainable by the very real physical and psychological changes she must be undergoing: but at times it seems rather arbitrary.